“I returned to civilization shortly after that and went to Cornell to teach, and my first impression was a very strange one. (…) I sat in a restaurant in New York, for example, and I looked out at the buildings and I began to think, you know, about how much the radius of the Hiroshima bomb damage was and so forth. (…) I would see people building a bridge, or they’d be making a new road, and I thought, they’re crazy, they just don’t understand, they don’t understand. Why are they making new things? It’s so useless.” 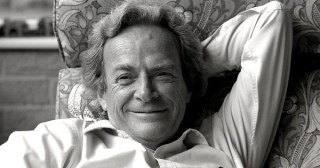 The Bethe – Feynman formula is a physics equation used to estimate the efficiency of an atomic weapon. This equation is widely misunderstood and surrounded by an aura of mysticism. In this post, I will thus take the time to explain how to obtain this formula from elementary ‘undergraduate’ physics. This approach is not discussed by Serber in his Los Alamos primer and, apparently, remains ‘classified’ to this day. Follow us on Twitter: @INTEL_TODAY

What is the question?

What is the energy released by a core of U-235 compared to the total energy it actually contains?

The Bethe-Feynman formula provides a simple answer to this question based on a set of reasonable assumptions.

The result is NOT accurate as several assumptions are a bit too simple. Nevertheless, it provides a very powerful tool to scale experimental results and design new weapons from known data.

It is of course impossible to know what contribution Bethe made to this work. He was the team leader and already regarded as one of the best physicists ever.

Bethe was often described as the most generous gift of Nazi Germany to the United States. What is obvious is that Feynman’s fingerprints are all over the place. One part genius and one part magician, this is the Feynman we love and miss so much.

I often wonder: What would Feynman say about that if he was still around?

A clue from ‘Dimensional Analysis’

Let us consider a pure U-235 spherical core of radius R and mass M. Once the chain reaction begins, the pressure quickly builds up and the core expands.

We seek a relation between the energy actually released in the explosion Er, the total energy of the core Et, the properties of the core (R, M) and the maximum expansion delta before the core reaches the second criticality.

Now, the acceleration is a length divided by the square of a time. Considering the problem at hands, F must be proportional to M . R . alpha^2 where alpha is the multiplicative time. (That is the time scale of the neutron number.) What else?

This simple analysis already reveals the ‘great secret’ of the Bethe-Feynman equation. The efficiency of the yield is proportional to R^2. Double the radius of a tested device, and you will get almost a ten-fold increase in efficiency. Not bad for a few seconds of work!

A simple derivation from the Bethe-Feynman equation

Beyond a certain expansion — say R (1 + delta) — the core becomes sub-critical and the chain reaction stops.

Let us consider a shell of volume dV, thickness dr and area dV/dr. The net outward force due to pressure is (pressure times area) F = dP . dV/dr — with dP the net pressure difference on both sides of the shell — which we write F = dP/dr . dV

Thus we found — by Newton second law! — that:

Let us approximate the core as an ideal gas expanding adiabatically.

The total energy of the core is M . epsilon (where epsilon is the energy per unit of mass)

Thus, the efficiency e is given by the following equation:

And that formula, my friends, is the Bethe-Feynman equation! Actually, one of them… [Because this result remains classified, I have no way of knowing what symbols Bethe and Feynman used and what their final result looks like.]

It is obvious that, as you improve over various assumptions, you will get a more accurate result at the price of a less elegant formula! The key finding is the dependence on R square, which as we have shown, requires no work/formula at all, as it just follows from dimensional analysis!

As Bethe once said: “Feynman was a magician!” This was not meant to be derogatory. Bethe only meant that you never knew how Feynman came to a result.

Well, a wise man once told me that if a magician pulls a rabbit from a hat, you can safely assume that the rabbit was there all along! And thus, in this case, I would bet — pun intended — that Feynman started ‘knowing’ the result which he had derived from dimensional analysis.

Of course, “Tricky Dick” would never admit that much. Feynman never once wrote neither commented on the technique of dimensional analysis…

That brings us back to Physics Rule N°1:

“Never try to solve a new problem before you know its solution!”

It usually takes some years to understand what this rule actually means. And some people never get it in a lifetime.

“I don’t want to [do secret work] because I want to do scientific research—that is, to find out more about how the world works.

And that is not secret; that work is not secret. There’s no secrecy associated with it. The things that are secret are engineering developments which I am not so interested in, except when the pressure of war, or something else like that, makes me work on it. …

Yes, I am definitely anti-working in secret projects. … I don’t think things should be secret, the people developing this. It seems to me very difficult for citizens to make a decision as to what’s going on when you can’t say what you’re doing.

And the whole idea of democracy, it seems to me, was that the public, where the power is supposed to lie, should be informed. And when there’s secrecy, it’s not informed.

Now, that’s a naive point of view, because if there weren’t secrecy, there’d be the Russians who would find out about it. On the other hand, there’s some awfully funny things that are secret.

It becomes secret that we know what the Russians are keeping secret from us, for instance, or something like that. It seems to me that things go too far in the secrecy.”

Hans Bethe: How I met Feynman at Los Alamos