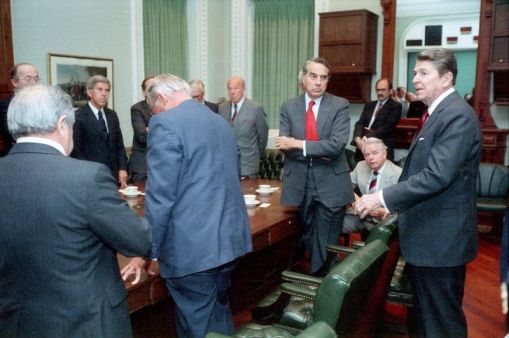 If you read this blog, chances are they you are familiar with the Iran-Contra Affair. At the same time, it is quite likely that you have never heard of a major US scandal that was running parallel to the Iran-Contra Operation. The two operations were in fact two branches of a single policy. If the delivery of weapons to Iran was the “Carrot” part of the plan suggested in the 1985 “Fuller MEMORANDUM“, the disinformation regarding “Libyan terrorism” was the “Stick”.  Follow us on Twitter: @INTEL_TODAY

The facts are well documented. But as the world — and the US Congress — discovered with horror the Iran-Contra Affair, the “Libyan Scandal” was quickly forgotten… There never was an investigation. And only one person resigned over this affair.

“Bernard Kalb resigned today (08 October 1986) as chief spokesman for Secretary of State George P. Shultz in protest of the government’s disinformation program directed at Libyan leader Moammar Kadafi. (…) He said his choice was to remain at the department and vanish into acquiescence or to quit in protest.” LA Times

Here is the story of one of the major US scandal you probably never heard of.

“Qaddafi has used terrorism as one of the primary instruments of his foreign policy and supports radical groups which use terrorist tactics.”

The report lists the anti-US illegal activities of Libya in Europe, Africa, the near and far-east, Central and Latin America as well as direct threats against the US.

The Reports specifically names the activities of Qaddafi  in Nicaragua and his support for the Popular Front for the Liberation of Palestine – General Command.

The Report concludes : “Qaddafi has abused diplomatic privilege for terrorist purposes, reneged on international agreements and blatantly used terrorist violence against political opponents. In addition, Qaddafi’s support of terrorism, regardless of his direct operational involvement in a given terrorist act, helps legitimize terrorism as an acceptable political activity. “

A witness names the cables’ recipient as Said Rashid.

[INTEL TODAY: This is the “Said Rashid” who allegedly ordered the MST-13 timers from a Swiss company MEBO.  The owner of MEBO — Edwin Bollier — claims that he delivered the first series of MST-13 timers to Rashid in Libya sometimes between September and November 1985. According to the Lockerbie trial, Pan Am 103 was destroyed with the use of this type of timer. The link between Lockerbie and the MST-13 timers has been discredited by several scientists. NB: Bollier’s passport has no Libya entry stamp for this period.]

“The despicable attack in Berlin fits the pattern of increased Libyan activities including Rome and Vienna. We have suspicions that this bombing is part of that pattern.”

German authorities do not support this theory.

Christian Lochte, Head of the Hamburg Branch of the BfV speaks on TV the next week: “I cannot rule out that Libya, in some way, is responsible. But I must say that such hasty blame regarding Rome and Vienna, for which Libya had immediately been made responsible, did not prove to be correct.”

The week after the raid, Reagan said: “If their government continues its campaign of terror against Americans, we will act again.”

“The pact was eagerly sought by Prime Minister Margaret Thatcher, who seeks the return of Irish Republican Army members accused of crimes in Great Britain.”

NYT PACT WITH BRITAIN ON EXTRADITIONS BACKED BY SENATE

“President Reagan had asked for quick Senate approval of the treaty as a sign of gratitude to Prime Minister Margaret Thatcher for her support of the April 14 U.S. bombing raid against Libya.”

“There were revenge killings of British hostages organized by Libya, which I bitterly regretted. But the much vaunted Libyan counter-attack did not and could not take place.”

[INTEL TODAY: EXCUSE ME? What does it mean about Lockerbie? Two Libyan citizens were indicted in 1991!]

Alleged Libyan Plot to Bomb US Embassy in Lomé, Togo.

Togo’s Interior minister Lade said that “two suitcases, which were loaded with explosives, an automatic pistol, and three grenades, were intercepted. These containers had been sent from Libya to its embassy in Cotonu, the capital of neighboring Benin, and the transshipped to Togo.” (See 11&13/08/1986)

NYT: MALTA SAYS LIBYA GOT A TIP ON RAID

Howard R Teicher proposes “to shame France into joining in some action… White House might have to go around the civilian government and rely and military to military channels… as political channels have failed earlier this year.”

“Given the stated desire of some French general officers to cooperate with us against Gadhafi, we might actively encourage them to sell the proposal to their civilian leadership.”

Around this day – DDI Richard Kerr and Tom Twetten are sent to the White House to explain what the CIA could do “to apply psychological pressure on Gaddafi”.

Twetten said it would be no problem for the CIA “to plant false stories in publications abroad” to unnerve Gadaffi.

“Prime Minister Mifsud Bonnici said the planes were picked up on radar 30 to 45 minutes before the raid, and Libya was notified shortly thereafter.”

Le Monde: Plot against US Embassy in Lomé

The information was discussed in a four-States mini-summit. Although Senegal is not a member state of this summit, its defense minister was invited.

11AM. Reagan meets with Shultz, Weinberger, Casey, Poindexter and Admiral William Crowe (Chairman of the Joint Chiefs of Staff)

“Poindexter lavished praise on Defense, saying that the April 14 raid had been technically impressive, that it had deterred terrorism…”

The MEMO states: “U.S. intelligence officials have concluded in August that Gadhafi was quiescent on the terrorist front.”

“Officials indicated today that Col. Muammar el-Qaddafi was planning terrorist attacks, and the White House warned that it was prepared to take whatever action is necessary to thwart the Libyan leader. ”

NYT: U.S. SAYS LIBYA MAY HAVE PLANS FOR NEW TERROR

”The Reagan Administration has perhaps launched a deliberate campaign of disinformation.”

Attempted Coup in Togo; “MST-13 Timers appearance” . US team brings one timer back to Washington.

“Disinformation Program” widely covered in the US; 5 stories in the NYT, 3 on the front page!

“Your White House, specifically your national security adviser, constructed an operation whereby the free press in this country was going to be used to convey a false story to the world, namely that Qaddafi was planning new terrorist operations.”

EXCERPTS FROM SESSION WITH THE PRESIDENT

In the evening, Shultz speaks to reporters at a Press Briefing:

”That did not seem consistent with other information I was looking at, Cohen said. I can only conclude that the reports were without foundation or someone was deliberately seeking to plant such information.”

In our opinion, it is very likely that the Togo Timers (MST-13 from MEBO) were actually planted by a  US Intelligence Agency in order to feed false accusations to the media about “Libyan Terrorism” activities in the context of the 1986 Disinformation Campaign.

Three years later, these very same two timers will become instrumental in establishing the responsibility of Libya in the destruction of Pan Am 103.

Many experts believe that PT/35(b) — the infamous fragment of the swiss timer found at Lockerbie — was indeed fabricated and planted at the site to point the finger at Gaddafi.

There are serious, undisputable scientific reasons to believe that this is indeed the case. [DP/10 : Evidence of Fabricated Proof?]

I understand that PT/35(b) is now the subject of a major new documentary. Several experts and witnesses are expected to reveal crucial information regarding the Lockerbie investigation.