“Mr Anderson’s report demonstrates how the bulk powers contained in the Investigatory Powers Bill are of crucial importance to our security and intelligence agencies. These powers often provide the only means by which our agencies are able to protect the British public from the most serious threats that we face.”

“The UK now has a surveillance law that is more suited to a dictatorship than a democracy. The state has unprecedented powers to monitor and analyse UK citizens’ communications regardless of whether we are suspected of any criminal activity.” 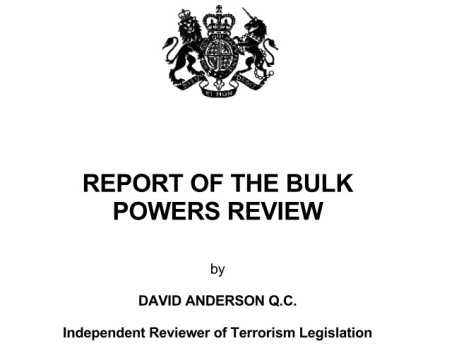 The Act legalizes a whole range of tools for snooping and hacking by the security services unmatched by any other country in western Europe or even the US.

The Investigatory Powers Act legalizes powers that the security agencies and police had been using for years without making this clear to either the public or parliament.

In October [2016], the investigatory powers tribunal, the only court that hears complaints against MI6, MI5 and GCHQ, ruled that they had been unlawfully collecting massive volumes of confidential personal data without proper oversight for 17 years. [Guardian]

“The passing of the investigatory powers bill has fundamentally changed the face of surveillance in this country. None of us online are now guaranteed the right to communicate privately and, most importantly, securely.”

Bulk interception involves the harvesting of large quantities of data from the internet and emails. Anderson backed three kinds of bulk data acquisition:

Bulk interception: The tapping of internet cables by GCHQ to target suspects outside the UK. The review says this is of “vital utility” to the security and intelligence agencies, citing the case of a kidnapping in Afghanistan that would have led to the killing of hostages, if spies had not used these powers.

Bulk acquisition of communications data: The gathering of data about communications but not the content of it. [disclosed publicly in November last year]

Bulk personal data sets: Databases of personal information, which could include everything from the electoral register to supermarket loyalty schemes, which the security services acquire openly or covertly.

However, Anderson expressed some reservations about a fourth practice:

Bulk equipment interference, which involves hacking into smart phones or computers over “a large geographical area”.

REPORT OF THE BULK POWERS REVIEW

This entry was posted in Bulk interception, Internet, Theresa May and tagged David Anderson Q.C.. Bookmark the permalink.