“It will be necessary to find some way of pulling Hammarskjold up short.”

“I continue to have a strong feeling that Hammarskjold’s death was not an accident.”

At the U.N. headquarters, few believe that the death of Dag Hammarskjöld was an accident. Many researchers have concluded that the former U.N. Secretary-General was assassinated by a South African paramilitary organization supported by the CIA and British intelligence and Belgian mercenaries. An official UN report should be released in this month. Follow us on Twitter: @INTEL_TODAY

UPDATE — The story is NOT going away. Here are a few developments that occurred over the last 12 months.

First. As always, better late than never… On July 15 2017, the New York Times has finally noticed the UN investigation regarding the ‘mysterious’ death of the second Secretary-General of the United Nations. This is a good opportunity to compare notes… with the post I published in November 2016.

According to the NYT:

“The investigation by Mr. Bjorkdahl suggested the plane had been shot down as it was approaching Ndola. That conclusion was based on interviews he conducted with residents of the Ndola area, who said they had seen a second smaller aircraft, but had never been asked to provide testimony for any official inquiry.”

Please, keep your eyes on the ball… And remember that, as a result of the NSA–Crypto-AG deal, the US Intelligence Community could read — in real-time — all messages from the UN Secretary-General. [The Crypto-AG machine he was using at the time of his death was rigged.] Although I denounced this affair long ago, it would take almost 10 more years for BBC‘s Security Correspondent  Gordon Corera  to admit (jut some, not all,  of) the facts.

Second. On June 13 2017, ‘Die Zeit’ has published an amazing piece: War es doch Mord? I am working on the details, but the author suggests that Hammarskjöld has indeed been murdered, probably with the complicity of western Intelligence agencies. (US, UK and Belgium)

Third. I understand that the UN investigator has spoken with a friend of mine who tells me that a UN report could be released in the next few weeks. Spoiler. The suspected countries have not been very helpful to the investigation. I understand that Belgium still refuses to provide any information arguing that it would be a risk to the National Security of the country!

“Seeking a complete understanding of the circumstances is our solemn duty to my illustrious and distinguished predecessor, Dag Hammarskjöld, to the other members of the party accompanying him, and to their families.”

Hammarskjöld was the U.N.’s second secretary-general. He died in a mysterious plane crash in 1961. The South African government has recently announced the  discovery of decades-old intelligence documents detailing a plot to assassinate him.

The CIA has dismissed allegations as “absurd and without foundation.” But, keep in mind that the DC-6 may have been attacked by one of the three Fouga Magisters that had been delivered to the secessionists aboard an American-owned cargo plane that was supposed to be delivering food. President John F. Kennedy was deeply embarrassed by the delivery, which was later reported to have been a C.I.A. operation.

Here is a short extract from “Foreign Policy Magazine”:

Researchers say many key players in the region, including white minority governments, had clashed with Hammarskjold, whose U.N peacekeepers had been battling Belgian-backed separatists in the mineral-rich Congolese province of Katanga. Days before Hammarskjold’s death, the U.N. launched an offensive against Katanga’s separatists as part of an effort to drive hundreds of Belgian officers and European mercenaries out of the country.

The U.N. leader was advocating for Congo’s full independence, while Belgium, with some support from Britain, the United States and South Africa, wanted to ensure that Katanga’s riches – which included the uranium ore used in the production of the atomic weapons dropped on Hiroshima and Nagasaki – remained in friendly hands and out of the reach of the Soviet Union. Several months earlier, the CIA had played a role in the assassination by Belgian officers and Katangese separatists of Congolese liberation leader Patrice Lumumba, who was suspected of moving too closely to the Soviet Union.

Hammarskjold, meanwhile, died while en route to discuss a cease-fire with Moise Tshombe, the Belgian-backed leader of Katanga’s secession drive. His broader mission was to convince at Tshombe to ditch his foreign backers and make peace with Congo’s pro-Western leaders. “All those parties – the Belgians, the South Africans, the CIA – had a reason for opposing Dag Hammarskjold’s mission,” Goldstone told FP.

Next month, U.N. Secretary-General Ban Ki-moon will issue a five-page note describing the existence of the new evidence and asking the General Assembly to open an inquiry.

“Seeking a complete understanding of the circumstances is our solemn duty to my illustrious and distinguished predecessor, Dag Hammarskjöld, to the other members of the party accompanying him, and to their families.”

The United Nations Secretary General has released a note calling for the appointment of an eminent person to review any new information related to the plane crash that killed former UN Chief Dag Hammarskjold in 1961.

Declaring “this may be our last chance to find the truth” Ban Ki-moon sent a note to the general assembly, saying there were enough unanswered questions arising from the crash to warrant further investigation and that the responses of the UK, US and Belgium (the major powers in the region at the time) to a UN request for archive material “do not appear to alter” that conclusion.

Dr Susan Williams’ latest book “Who Killed Hammarskjöld?” (Hurst 2011) assembled a significant body of new evidence to suggest that the 1961 plane crash in which Dag Hammarskjöld died was not an accident.

On the strength of which, the Hammarskjöld Commission was established in 2012, and recommended in September 2013 that the adjourned 1962 UN Inquiry into Dag Hammarskjöld’s death be reopened to examine the new evidence assembled by Dr Williams. [WIKISPOOK] 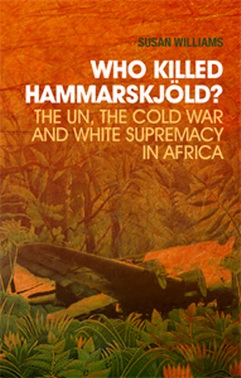 “I think the British response is extraordinary. It’s very brisk and curt and evasive,” said Susan Williams, a British historian at the School of Advanced Study, University of London, whose book Who Killed Hammarskjöld: The UN, the Cold War and White Supremacy in Africa, revealed new evidence that helped persuade the UN to open a new investigation into the crash near Ndola, in what was then the British colony of Northern Rhodesia, now Zambia.

Part of that evidence was a report from a British intelligence officer, Neil Ritchie, who was in the area at the time of the crash and who was trying to organise a meeting between Hammarskjöld and a rebel leader from neighbouring Congo, where the UN secretary general was trying to broker a truce.

“This was British territory and they had a man on the ground. It doesn’t make them responsible for the crash but it does indicate they knew a lot of what was going on,” Williams said, adding it was “highly unlikely” that Ritchie’s report which she found in an archive at Essex University, was the only British intelligence report coming the area at the time. [The Guardian]

* Former chief prosecutor for the U.N. war crimes tribunals in Rwanda and Yugoslavia

UN to probe whether iconic secretary-general Dag Hammarskjold was assassinated