“It was a long journey – personally and professionally. At some times, it felt like I had fallen down Alice’s rabbit hole, where white is black and black is white. Very disorienting. The idea of the memoir was quite selfish – to take stock of the whirlwind my husband and I had just been through and to finally use my voice.”

“The concern is that publication of the manuscript as submitted would cause additional damage to operations and would affect the agency’s ability to conduct intelligence activities in the future.” 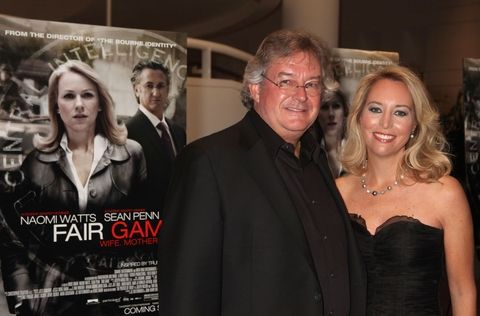 Ambassador Joseph Wilson and Valerie Plame arrive at the premier of Fair Game in LA in 2010.

When Valerie Plame Wilson reported that her husband had found no evidence of the sale of uranium from Niger to Iraq, it marked the first event in the protracted and well-documented saga that led to the illegal release of Valerie Plame-Wilson’s classified identity by former State Department official Richard Armitage and the conviction of former Vice President Chief of Staff Scooter Libby. Follow us on Twitter: @INTEL_TODAY

UPDATE — The story of former CIA NOC Valerie Plame seemed to be a well forgotten one until two recent events reminded us of her extraordinary saga: the appointment of a “special Counsel” to investigate the allegations of a Trump-Russia collusion and the attempted abuse of the Intelligence Identities Protection Act of 1982 to cover the identity of a CIA administrator.

What It’s Like to Be at the Center of a Special Counsel Investigation?

Politicians on the left, pundits of all stripes, and professors galore threw out the phrase as a solution to the current constitutional crisis that has President Trump belittling or defenestrating anyone who suggests Russians might have helped elect him. But would a special counsel ferret out the Russians and salve the nation’s wounds?

It may not be that easy.

Remember Valerie Plame? The former CIA agent wrote her memoir, Fair Game: How a Top CIA Agent Was Betrayed by Her Own Government, which became the subject of a feature film about her life. More than a decade ago she was at the center of the last high-profile special counsel investigation, which did not turn out as expected. With a touch of irony, that affair has direct ties to our current imbroglio, through none other than James Comey.

In her case, the special counsel did lead to the arrest and indictment of one member of the Bush administration, though stubborn mysteries of her case remain unsolved. Still, the process works, she said.

“When an issue is so fraught with partisanship,” she told me in an interview yesterday, “a special counsel provides some modicum of transparency and accountability rather the veil of politics.”

Plame is married to Joe Wilson, a diplomat who became a prominent Iraq War critic. Dispatched to Africa in 2002 on a mission to trace nuclear material that the Bush administration was trying to link to Saddam Hussein’s “weapons of mass destruction,” Wilson found nothing. In a devastating essay in the New York Times, he debunked the run up to the war and infuriated Vice President Dick Cheney, among others.

To discredit and wound Wilson, a White House official allegedly leaked the identity of Valerie Plame as a CIA operative, which is a federal crime. Senators called for the appointment of a special counsel.

And by the way… Nobody was charged with blowing her cover, but Lewis “Scooter” Libby, Cheney’s former chief of staff, was found guilty of lying and obstructing the investigation. His sentence included a $250,000 fine, 30 months in prison and two years of probation. On July 2, 2007, President George W. Bush commuted Libby’s sentence, removing the jail term but leaving in place the fine and probation.

On April 3, 1998, she married Joseph C. Wilson, who was then a U.S. ambassador. During the buildup to the war in Iraq, he was recruited to investigate claims of Iraq’s alleged purchase of yellowcake uranium from Niger.

As the subject of the 2003 Plame affair —  also known as the CIA leak scandal — Plame had her identity as covert officer of the CIA leaked to the press by members of the George W. Bush administration and subsequently made public.

Plame has written a memoir detailing her career and the events leading up to her resignation from the CIA. But that did not come easily, as a contractual obligation required that she submit a draft of the memoir to a CIA review board before it could be published.

It came back heavily expurgated, with many names and dates – including Plame-Wilson’s exact dates of service – struck out with black lines that are still printed with each copy today.

When their attempt to appeal the decision was dismissed, Valerie Plame-Wilson hired national security reporter Laura Rozen to write an afterword, which provided context for the redactions.

The film, Fair Game, was released November 5, 2010, starring Naomi Watts and Sean Penn. It is based on two books, one written by Plame, and the other by her husband. The Washington Post described the movie as being “full of distortions – not to mention outright inventions”

Richard Welch’s murder contributed to passage of the Intelligence Identities Protection Act of 1982, making it illegal to reveal the name of an agent who has a covert relationship with an American intelligence organization.

As New York Times reporter Tim Weiner said in a review appearing in his paper, “only in America could the intelligence memoir become a literary genre.”  Well, make room on your bookshelf, because the genre is growing before our very eyes.

Three recent additions have benefited remarkably from media attention, good reviews, and enviable sales. Together they are illustrative of what we will see more of, unless and until the novelty wears off and the news media are less captivated with the subject of what in the world is wrong with intelligence. Inquiries, commission reports, reform legislation, hearings, and headlines have helped put a spotlight on these publications and their authors that is not likely to continue indefinitely.

There is nothing inherently wrong with authors capitalizing on publicity. What is somewhat curious is that publication has bestowed a degree of expertise on these authors that largely stems from their books appearing at a propitious time. (It is pertinent, if unkind, to observe that this also is known as luck.) For example, Lindsay Moran, with the briefest career experience of any memoir writer in memory, soon after her book was published appeared in the New York Times as an op-ed author critiquing reform of the clandestine service. This is after a “career” that many a veteran CIA officer would consider a cup of coffee with the Agency: five years and one overseas assignment. Melissa Boyle Mahle abbreviated her career before 15 years with an “operational mistake,” best left at that.

What is annoying about the attention given these books is the suspicion that they owe it to some degree to publishers’ persistence in pandering to (and therefore perpetuating) stereotypes about the CIA. A pet peeve of this reviewer is the apparent conviction on the part of the media, which of course include book publishers, that the CIA must appear sinister, stupid, or scandalous for someone to read about it. On occasion (the Rick Ames story comes notably to mind), the CIA serves up a trifecta on its own. But it should not follow that a CIA memoir will sell only if it suggests an inside revelation of something sinister, stupid, or scandalous.

Publishers cannot resist a titillating (never mind misleading) title, sometimes over the author’s objections. John Ranelagh claimed that calling his seminal history of the Agency’s first 40 years The Rise and Decline of the CIA was strictly the publisher’s idea, which he argued against in vain. The catchy title of Fixing the Spy Machine required its author, Arthur Hulnick, to devote the first part of his book to explaining that intelligence really isn’t a machine, really isn’t broken, and really doesn’t need to be fixed. The title of the recent Why Secret Intelligence Fails obliged author Michael Turner to explain that it really doesn’t fail.

Moran may well have conceived or delighted in the catchy/sexy title Blowing My Cover, but Mahle insists that her publisher pressed her for the title Denial and Deception as well as for rewrites that would make the book less about intelligence and more about her. Even the New York Times Book Review could not resist adorning a review of CIA memoirs with a curious illustration of a head that was half face/half bomb with a fuse protruding from the back and a pistol tucked beside the face and into a fedora from which a presumably poison pen stuck out. Such sales gimmicks, if all too predictable, are regrettable because they detract from serious content. Together with a publisher’s pressure on an author, they may even distort the content and thus lessen the value of writing that can in fact make a meaningful contribution to intelligence literature and to public understanding of intelligence.

Lindsay Moran probably needed no prodding. Evidently more interested in profit than perspective, her Blowing My Cover illustrates how a clever ex-employee can capitalize on the CIA’s undeniable mystique. One looks in vain for a serious message in her one-dimensional put-down of the Agency’s operational training. Moran doubtless will not endear herself to her erstwhile colleagues, but for a general readership she is a facile writer who comes across as a breezy romantic. Fresh from Harvard, she decided that joining the CIA would be really cool. Before long, she decided it was even more cool to find a boyfriend. When she did, she decided to throw over the Agency and get married. She did both. End of story. Moran’s cheeky style and brisk prose makes for a good read, but don’t look for her book in the libraries at CIA training sites. (…)

So we members of the Agency club, past and present, ought not to be thin-skinned. Maybe a Lindsay Moran has a point. Whether she does or not, it speaks well for the Agency that she is allowed to express her view. The writing and publishing of candid CIA memoirs speaks well for our democracy. And if we are going to plant it around the globe—something this country has yearned to do since at least the days of Woodrow Wilson—we darn well better be willing to practice it. Secret organization or no, the first amendment is the cost of doing business in a free society. Honoring by exercising this freedom is why the writing of a CIA memoir is not a bad thing.

Ex-spy Plame and publisher sue CIA over her memoir — Reuters