“Wayne Simmons is a fraud. Simmons has no military or intelligence background, or any skills relevant to the positions he attained through his fraud.”

Dana Boente — US Attorney for the Eastern District of Virginia.

Wayne Simmons has appeared on Fox News, as an “expert” on terrorism since 2002. Simmons was portrayed as an “Outside Paramilitary Special Operations Officer” for the Central Intelligence Agency from 1973 to 2000. This was simply not true. During these years, the Fox News “terrorism expert” had worked as a nightclub doorman, a bookie, and manager of a rent-by-the-hour hot tub business… Follow us on Twitter: @INTEL_TODAY

UPDATE — I am still puzzled by this one. It is truly shocking that a US mainstream media would fail to check the background of one of their own ‘experts’ on terrorism. [Chomsky would probably say: “Can you imagine the furor if RT was making such a mistake?”]

About Dana Boente — On May 9 2017,  U.S. Attorney Dana Boente’s office issued subpoenas to Flynn’s associates. The U.S. Attorney’s office is seeking business records from the period after Flynn was ousted as Director of the Defense Intelligence Agency in 2014.

About Fox News — There is a bit of hope as top host Shepard Smith broke with network orthodoxy on Friday (July 14 2017), issuing a sharp denunciation of the Trump administration’s handling of investigations into its links with Russia.

[By the way, the line “Oh, what a tangled web we weave
When first we practise to deceive!” quoted by Smith is from “Marmion“, an epic poem by Sir Walter Scott about the Battle of Flodden (1513).]

The outburst came after it was reported that more people attended a meeting between Donald Trump Jr and Russian lawyer Natalia Veselnitskaya at Trump Tower in New York in June 2016 than had previously been disclosed. [Guardian]

But much works needs to be done at Fox News. In a piece published last week, the US network fails to properly describe Robert Levinson as a CIA contractor, despite the fact that this information has been in the public domain for years. Such mistakes are not helpful… — END of UPDATE

Simmons claimed to have been a CIA agent. He must have worked ‘deep undercover’ for even the Agency did not know him.

Simmons was sentenced to 33 months in prison on charges that he fraudulently claimed to have been a CIA agent for decades. 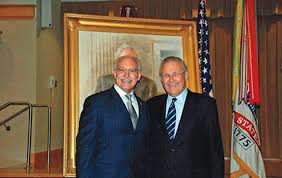 Dana Boente — US Attorney for the Eastern District of Virginia — did not mince her words.

“Wayne Simmons is a fraud. Simmons has no military or intelligence background, or any skills relevant to the positions he attained through his fraud.”

A grand jury indicted him in October for portraying himself as an “Outside Paramilitary Special Operations Officer” for the Central Intelligence Agency from 1973 to 2000.

“Instead of working for the CIA, Simmons’ jobs during that period included nightclub doorman, bookie, manager of a rent-by-the-hour hot tub business, mortgage broker and defensive back for the National Football League’s New Orleans Saints.”