“In October, as Chairman of the Subcommittee on Narcotics and Drug Interdiction of the President’s Commission on Organized Crime, I had presided over a seminar at which Barry Seal had testified. His purpose there was to inform the commission and top United States officials of the methods and equipment used by drug smugglers… and (he) was scheduled to be a key witness in the government’s case against Jorge Ochoa-Vasquez, the head of one of the largest drug cartels in the world. WHY WAS SUCH AN IMPORTANT WITNESS NOT GIVEN PROTECTION WHETHER HE WANTED IT OR NOT?” 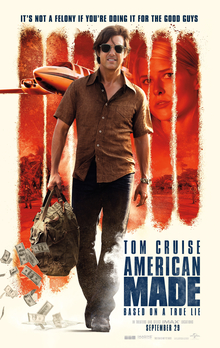 Tom Cruise will play Louisiana-born smuggler Adler B Seal, known as Barry, in the biopic ‘American Made’ (initially titled Mena), set in the 1980s and directed by Doug Liman, who also directed the star in Edge of Tomorrow. Follow us on Twitter: @INTEL_TODAY

American Made tells the story of Barry Seal (Tom Cruise), a TWA pilot who is recruited by the CIA to help counter the emerging communist threat in Central America.

Seal’s role in this major CIA covert operation led in turn to his involvement with the Medellin cartel, which ultimately embarrassed the Reagan White House after the Iran-Contra scandal became public.

The movie will also will also star Brian Dennehy as Bill Clinton and Connor Trinneer as US VP George W. Bush.

US REPORT: Colombia’s cocaine production is ‘up’. Really?

Barry Seal was a Medellín pilot who operated out of Mena, Arkansas, between 1976 and 1984, transporting cannabis, cocaine and later quaaludes from South America to the US. He was arrested in 1984 and began working for the US Drug Enforcement Administration to avoid jail time. Seal was shot dead in 1986 at a safe house in Baton Rouge, Louisiana, by Colombian hitmen working for the cartel. [Guardian]

Documentary exploring the rise and fall of the richest and most violent cocaine drug lord, Pablo Escobar — hunted down and killed by the Colombian police and the U.S. Drug Enforcement Agency. Includes interviews with Escobar’s family, DEA agents and former drug smugglers.