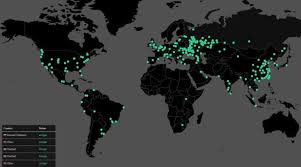 New analysis suggests Chinese-speaking criminals may have been behind the WannaCry ransomware that affected thousands of organisations worldwide.

Researchers from Flashpoint looked at the language used in the ransom notice.

They said the use of proper grammar and punctuation in only the Chinese versions indicated the writer was “native or at least fluent” in Chinese.

The translated versions of the ransom notice appeared to be mostly “machine translated”.

The WannaCry ransom note could be displayed in 28 different languages, but only the Chinese and English versions appeared to have been written by humans.

The English text also used some unusual phrases such as: “But you have not so enough time”.

The UK’s National Crime Agency, the FBI and Europol are investigating who was responsible for the ransomware.

Some earlier analysis of the software had suggested criminals in North Korea may have been behind it.

But the Flashpoint researchers noted the Korean-language ransom note was a poorly translated version of the English text.

“There is no basis” for suggesting that President Trump’s disclosure of classified intelligence to Russian officials was illegal, wrote Morton Halperin this week.

To the contrary, “senior U.S. government officials in conversations with foreign officials decide on a daily basis to provide them with information that is properly classified and that will remain classified,” wrote Halperin, who is himself a former senior official.

“We should not let our desire to confront President Trump lead us to espouse positions that violate his rights and that would constrain future presidents in inappropriate ways.” See “Trump’s Disclosure Did Not Break the Law”by Morton H. Halperin, Just Security, May 23, 2017.

But constraints on presidential disclosure were on the minds of Rep. Stephanie Murphy (D-FL) and 17 House colleagues. They introduced legislation on May 24“that would require the President to notify the intelligence committees when a U.S. official, including the President, intentionally or inadvertently discloses top-secret information to a nation that sponsors terrorism or, like Russia, is subject to U.S. sanctions.”

Yesterday, Rep. Dutch Ruppersberger (D-MD) introduced a bill“to ensure that a mitigation process and protocols are in place in the case of a disclosure of classified information by the President.”

Perhaps Jared Kushner really believed that his New York real-estate skills set him up to bring peace to the Middle East, solve the opioid crisis, run a government SWAT team of business experts and protect his father-in-law from disloyal White House advisers. And that he could do it all while observing the Jewish Sabbath and reserving enough time for family ski vacations with Ivanka and their three children.

Or maybe Kushner just calculated that all the hype surrounding his White House role was a not-to-be-missed family branding opportunity. After all, the Washington Post recently watched as his sister, Nicole Kushner Meyer, hawked American visas in Beijing to would-be Chinese investors in a troubled Kushner New Jersey real-estate development.

But in all his fantasies about conquering Washington at Donald Trump’s side, Kushner undoubtedly never imagined being ensnared in an FBI investigation.

All that changed, of course, when news broke late last week that Kushner had discussed opening up a secret back channel to Moscow last December in a Trump Tower meeting with the ubiquitous Russian ambassador Sergey Kislyak.

Cavusoglu’s remarks came after French and German leaders criticized the detention of European journalists in Turkey at a meeting of NATO leaders in Brussels on Thursday. It is the latest example of plunging relations between Erdogan and Western leaders following last year’s failed coup attempt.

“This is the new trend in Europe,” Cavusoglu told BuzzFeed News in an interview. “The secret services of those countries are using journalists and also bloggers in Turkey.”

He said that when journalists working for European security services are detained by Turkish authorities, the Europeans “make a lot of noise.”

“They know when they are journalists, it becomes a big issue,” he said.

Cavusoglu said he specifically raised this complaint with Germany, which is contesting the arrest of Deniz Yucel, a German-Turkish journalist who was detained more than 100 days ago and imprisoned without trial.

“I shared this information with Germans that he was working for the Secret Service of Germany,” Cavusoglu said.

Yucel was arrested on February 14 on charges of publishing terrorist propaganda and inciting the public to violence. Yucel, a reporter for Die Welt, reported on emails that a left-wing hacker collective apparently obtained from the email account of Berat Albayrak, the son-in-law of Erdogan and Turkey’s minister of energy.

The allegations could have dire consequences for press freedoms in Turkey, where journalists critical of the government or linked to opposition movements have been forced from their jobs or tossed into prison.