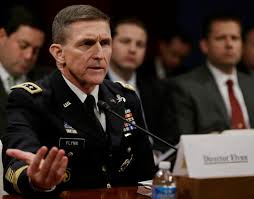 Michael Flynn invoked his legal right against self-incrimination, his lawyers told the committee.

The Senate Intelligence Committee is investigating possible links between the Trump campaign and Kremlin.

Mr Flynn stood down in February after it emerged he lied about his contacts with the Russian ambassador.

But they vowed to “vigorously pursue General Flynn’s testimony”.

United Nations experts investigating violations of sanctions on North Korea have suffered a “sustained” cyber-attack by unknown hackers with “very detailed insight” into their work, according to an email warning seen by Reuters.

The hackers eventually breached the computer of one of the experts on 8 May, the chair of the panel of experts wrote in an email to UN officials and the UN security council’s North Korea sanctions committee, known as the 1718 committee.

“The zip file was sent with a highly personalized message which shows the hackers have very detailed insight into the panel’s current investigations structure and working methods,” read the email, which was sent on 8 May.

“As a number of 1718 committee members were targeted in a similar fashion in 2016, I am writing to you all to alert you to this heightened risk,” the chair of the panel of experts wrote, describing the attack as part of a “sustained cyber campaign”.

A spokesman for the Italian mission to the United Nations, which chairs the 1718 sanctions committee, said on Friday that a member of the panel of experts had been hacked.

No further details on who might be responsible were immediately available.

According to the Washington Post, James Comey wasn’t the only person that President Trump pressured regarding the FBI’s Russia investigation:

Trump made separate appeals to the director of national intelligence, Daniel Coats, and to Adm. Michael S. Rogers, the director of the National Security Agency, urging them to publicly deny the existence of any evidence of collusion during the 2016 election.

Coats and Rogers refused to comply with the requests, which they both deemed to be inappropriate, according to two current and two former officials, who spoke on the condition of anonymity to discuss private communications with the president….Trump’s conversation with Rogers was documented contemporaneously in an internal memo written by a senior NSA official, according to the officials. It is unclear if a similar memo was prepared by the Office of the Director of National Intelligence to document Trump’s conversation with Coats.

….In addition to the requests to Coats and Rogers, senior White House officials sounded out top intelligence officials about the possibility of intervening directly with Comey to encourage the FBI to drop its probe of Michael Flynn….“Can we ask him to shut down the investigation? Are you able to assist in this matter?” one official said of the line of questioning from the White House.

The number of clubs is higher than previously reported and the “sleeper cells” could stage violent provocations ahead of the upcoming German elections, they said.

The warnings come amid concerns by enemies of the Russian state who live in the EU that they could be harmed for their work.

The martial arts clubs, which teach an offensive style called “systema”, all have “direct or indirect” links to the GRU military intelligence or FSB domestic intelligence services in Russia, according to Dmitrij Chmelnizki, a scholar of Russian espionage who lives in Berlin.

He said the GRU was using them to recruit agents in the West the same way that it used to when it had bases in the former East Germany in Cold War times.

His investigation found 63 systema clubs in Germany and dozens more in other EU states, in the Western Balkans, and in North America.

Many of the clubs publicly boasted that they had links to Russian special forces and used GRU or FSB insignia, such as images of bats or of St. George.