“”I hope you can let this [investigation] go.” 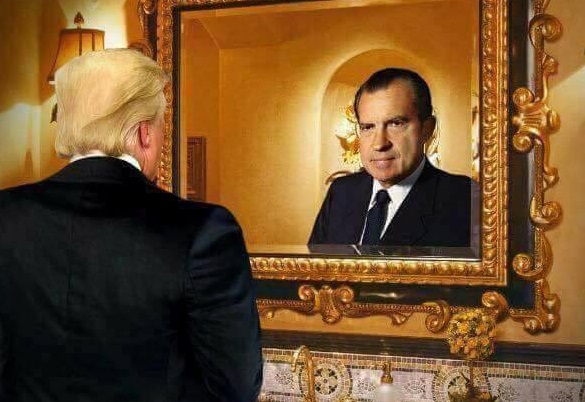 On February 14 2017, President Donald Trump asked FBI chief James Comey to drop the FBI investigation of General Mike Flynn which probes — among other scandals — into possible links between the ex-national security adviser and Russia.

According to a memo written by the ex-FBI director — immediately after the meeting —  Mr Trump  told Mr Comey: “I hope you can let this [the FBI investigation] go.”

The meeting occurred the day after General Mike Flynn was dismissed. (See Timeline)

Senator John McCain believes that this affair has become a scandal of “Watergate size and scale”.

“Despite the conversation between Mr. Trump and Mr. Comey, the investigation of Mr. Flynn has proceeded. In Virginia, a federal grand jury has issued subpoenas in recent weeks for records related to Mr. Flynn. Part of the Flynn investigation is centered on his financial links to Russia and Turkey.”

During the meal, Mr. Comey tried to explain to Mr. Trump how he saw his role as F.B.I. director. Mr. Comey told Mr. Trump that the country would be best served by an independent F.B.I. and Justice Department.

As they ate, the president and Mr. Comey made small talk about the election and the crowd sizes at Mr. Trump’s rallies. The president then turned the conversation to whether Mr. Comey would pledge his loyalty to him.

Mr. Comey declined to make that pledge. Instead, Mr. Comey has recounted to others, he told Mr. Trump that he would always be honest with him, but that he was not “reliable” in the conventional political sense.

By Mr. Comey’s account, his answer to Mr. Trump’s initial question apparently did not satisfy the president, the associates said. Later in the dinner, Mr. Trump again said to Mr. Comey that he needed his loyalty.

Mr. Comey again replied that he would give him “honesty” and did not pledge his loyalty, according to the account of the conversation.

But Mr. Trump pressed him on whether it would be “honest loyalty.”

“You will have that,” Mr. Comey told his associates he responded.

Mr. Trump said he asked the F.B.I. director if he was under investigation, a question that legal experts called highly unusual if not improper. In Mr. Trump’s telling, Mr. Comey reassured him that he was not.

The January 27 dinner came a day after White House officials learned that Mr. Flynn had been interviewed by F.B.I. agents about his phone calls with the Russian ambassador, Sergey I. Kislyak.

On Jan. 26, the acting attorney general, Sally Q. Yates, told the White House counsel about the interview, and said Mr. Flynn could be subject to blackmail by the Russians because they knew he had lied about the content of the calls. (See Timeline)

On February 14 — a day after the firing of General Flynn (See Timeline) — Mr. Comey had been in the Oval Office with other senior national security officials for a terrorism threat briefing.

When the meeting ended, president Trump asked all those present — including VP Mike Pence and Attorney General Jeff Sessions — to leave the room except for FBI Director James Comey.

“Alone in the Oval Office, Mr. Trump began the discussion by condemning leaks to the news media, saying that Mr. Comey should consider putting reporters in prison for publishing classified information, according to one of Mr. Comey’s associates.”

In a Twitter post on Friday, President Trump said that “James Comey better hope that there are no ‘tapes’ of our conversations before he starts leaking to the press!”

RELATED POST: The Michael Flynn Saga: “The more you know, the less you understand.” [UPDATE]

He has potentially problematic connections to foreign governments. (He accepted money for appearing at a lavish gala with Putin in Moscow last year. His consulting firm has financial ties to Turkey… which perhaps explains why he said that he would extradite Fethullah Gullen…)

On February 14 2017, while Trump was asking Comey to drop the investigation of General Flynn, INTEL TODAY suggested that Flynn could be indicted and Trump impeached.

RELATED POST: Mike Flynn has resigned. Could an indictment lead to an impeachment?

2013 — As DIA chief, Flynn visited the GRU headquarters in Moscow. He was the first US officer ever allowed inside its headquarters.  A second GRU visit was planned but denied. During this trip, he meets Russian diplomat Sergey Ivanovich Kislyak for the first time.

October 8 2014 — a letter to Flynn from the Defense Intelligence Agency (DIA) Office of General Counsel explicitly warns Flynn, as he entered retirement, that he was prohibited by the Constitution from receiving payments from foreign sources without advance permission.

July 15 2016 — Attempted coup in Turkey. Ankara claims Gulen, who has lived in self-imposed exile in the US since 1999, masterminded the failed putsch. Extradition requested. Turkey Coup: “CIA Plotters’ Meeting” in Büyükada

August 9 2016 — Flynn Intel Group entered into a contract with Inovo, a consulting firm based in the Netherlands. The work focused on Mr. Fethullah Gulen and charter schools in the United States that are associated with Gulen.

August 24 2016 — U.S. Vice President Joe Biden visited Turkey. Biden made it clear that an extradition request is a legal matter, not one for the POTUS to decide.

November 8 2016 — Suspicions about Flynn’s ties to the Turkish government were sparked by an op-ed he wrote in the Hill. Flynn calls Gulen ‘shady’ and endorses his extradition.

November 10 2016 — Mike Flynn calling for the extradition of Gulen

December 17 2016 — Three experts — including former MI6 chief Sir Richard Dearlove — unexpectedly resigned from their positions at the Cambridge Intelligence Seminar (CIS), amid concerns that the Kremlin is behind a newly-established intelligence journal, which provides funding for CIS.

December 28 2016 — Russia Amb. Kislyak  replies asking if they can talk on the phone?

December 29 2016 — US expels Russian diplomats over cyber attack allegations. The Obama administration said the GRU is responsible for the DNC hack.

December 30 2016 — Putin announced that he would not retaliate. Trump praised Putin for the decision, writing in a Twitter post, “Great move on delay (by V.Putin). I always knew he was very smart!”

Jan 5 2017 — “Effective immediately, Ambassador Woolsey is no longer a Senior Advisor to President-Elect Trump or the Transition.”Woolsey said on CNN that he did not want to “fly under false colors” any longer.

January 24 2017 —Sally Yates, the former acting attorney general, again raised the issue with FBI Comey, who now backed away from his opposition to informing the White House.

January 26 2017 — Yates and a senior career national security official spoke to McGahn, the White House counsel. Yates tells the White House counsel that Flynn is vulnerable to blackmail by Russian intelligence.Yates  considered Flynn’s comments in the intercepted call with Russia Amb. Kislyak  to be “highly significant” and “potentially illegal”

January 27 2017 — Yates and McGahn second meeting. McGahn wants to know 4 Things. Why the DOJ cares? Is there a criminal case? Could the White House decision be interpreted as interference? What and where is the evidence against Flynn?

March 8 2017 — Flynn Intel Group Inc filed retroactive documents with the Department of Justice to register as a foreign agent.

March 24 2017 — WSJ breaks the news of the September 19 meeting (Woolsey). The meeting was however mentioned in the documents filed on March 8 2017.

May 9 2017 — Comey is dismissed by PresidentTrump

By firing James Comey, Trump has put impeachment on the table — VOX