“A source told me that Pompeo had personally briefed Trump on April 6 about the CIA’s belief that Syrian President Bashar al-Assad was likely not responsible for the lethal poison-gas incident in northern Syria two days earlier — and thus Pompeo was excluded from the larger meeting as Trump reached a contrary decision.” 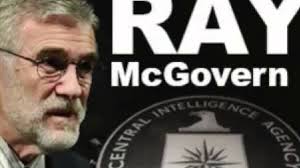 Former CIA Analyst Ray McGovern explains what he has learned from his sources about how the Syrian “chemical attack” actually went down. Follow us on Twitter: @INTEL_TODAY

On 4 April 2017, the town of Khan Shaykhun in the Idlib Governorate of Syria, was struck by a heavy airstrike followed by massive civilian chemical poisoning.

At the time of the attack the town was under the control of Tahrir al-Sham,formerly known as the al-Nusra Front.

The President of the United States, Donald Trump, as well as the UK Foreign Secretary, Boris Johnson, blamed the attack on the forces of Syrian President Bashar Assad, while the Russian and Syrian governments said it was caused by the Syrian Air Force’s destruction of a nearby rebel-operated chemical weapons warehouse.

In response, the United States launched 59 cruise missiles at Shayrat Air Base, which U.S. Intelligence believed was the source of the attack.

According to the former CIA Analyst:

What seems not to have been known was the existence nearby of a large storage facility for chemicals.  That too was damaged, releasing a cloud of chemicals that the wind blew south and poisoned those villagers.”

The most likely scenario

As I reported recently, here is what most likely happened:

The Russians briefed the United States on the proposed target. This is a process that started more than two months ago. There is a dedicated phone line that is being used to coordinate and deconflict (i.e., prevent US and Russian air assets from shooting at each other) the upcoming operation.

The United States was fully briefed on the fact that there was a target in Idlib that the Russians believes was a weapons and explosives depot for Islamic rebels.

The Syrian Air Force hit the target with conventional weapons. All involved expected to see a massive secondary explosion. That did not happen. Instead, smoke, chemical smoke, began billowing from the site. It turns out that the Islamic rebels used that site to store chemicals, not sarin, that were deadly. The chemicals included organic phosphates and chlorine and they followed the wind and killed civilians.

There was a strong wind blowing that day and the cloud was driven to a nearby village and caused casualties.

We know it was not sarin. How? Very simple. The so-called “first responders” handled the victims without gloves. If this had been sarin they would have died. Sarin on the skin will kill you.

RELATED POST: Former DIA Colonel: “US strikes on Syria based on a lie”

Where is CIA Director Mike Pompeo?

As President Trump was launching his missile strike against Syria, CIA Director Pompeo and other intelligence officials were nowhere in sight. 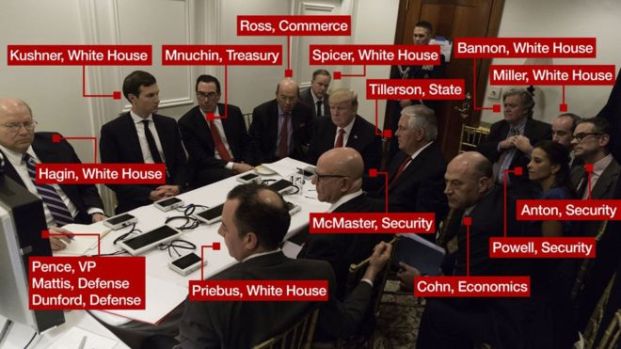 According to Spicer’s tweet, the people present are looking at a screen showing Vice-President Mike Pence, Defence Secretary James Mattis and Joseph Dunford, chair of the Joint Chiefs of Staff.

“Before the photo was released on Friday (April 7 2017), a source told me that Pompeo had personally briefed Trump on April 6 about the CIA’s belief that Syrian President Bashar al-Assad was likely not responsible for the lethal poison-gas incident in northern Syria two days earlier — and thus Pompeo was excluded from the larger meeting as Trump reached a contrary decision.”

“You don’t see Pompeo or Director of National Intelligence Dan Coats or any other intelligence official. Even The New York Times noted the oddity in its Saturday editions, writing: “If there were C.I.A. and other intelligence briefers around, … they are not in the picture.” [Robert Parry – Consortium News]

Ray McGovern served as a CIA analyst from the administration of John Kennedy to that of George H.W. Bush, and prepared the President’s Daily Brief for Nixon, Ford, and Reagan. He is a member of the Steering Group of Veteran Intelligence Professionals for Sanity (VIPS).

Where Was CIA’s Pompeo on Syria? — Consortium News