“Mikhail Svinolup is one of the most experienced employees of the FSB Investigations Directorate and one of the most intelligent. He is an interesting interlocutor, despite the fact that we disagree as opponents.”

The high-profile case of treason involving three FSB officers has been assigned to a well-known and highly experienced officer of the Special Services Investigation Directorate: Mikhail Svinolup. One of the FSB officer will be defended by Ivan Pavlov. Svinolup and Pavlov have met on several high-profile treason cases. Follow us on Twitter: @INTEL_TODAY

Russian media have reported that the three FSB officers and Ruslan Stoyanov are accused of having passed secrets to U.S. firm Verisign — and other unidentified American companies — which in turn shared them with U.S. intelligence agencies.

The four men were arrested on December 4 2016 and are detained on charges of high treason (Art. 275 of the Russian Criminal Code).

Svinolup has conducted several high-profile cases of treason. Svinolup was assigned to the trial of Svetlana Davydova accused of high treason because of a phone call placed to the Ukrainian Embassy in Moscow in 2014. Lawyer Ivan Pavlov defended Davydova in court. Pavlov was able to establish that the information Davydova had provided to the Ukrainian Embassy had comprised no state secrets. The criminal case against her was terminated for absence of a crime.

Pavlov also served as a legal attorney for Grigory Pasko, a military journalist accused of espionage in favor of Japan for his publications on radiation safety issues. Though usually such an accusation leads to long imprisonment, Pasko’s sentence was ‘limited’ to four years of prison. Pasko was later released on parole.

In 2013, Pavlov achieved termination of the criminal case against Igor Y. Baranov, a Professor of the Baltic State Technical University (St. Petersburg). Baranov was accused of attempting to depart the country with “materials that could be used for production of weapons of mass destruction”. Actually, the “material” was his own research published papers to be presented at an international scientific conference.

Pavlov also defended Gennady Kravtsov, who was convicted of state treason in September 2015 and sentenced to 14 years in a penal colony. Seeking a job at a Swedish company, Kravtsov — who had worked for the GRU from 1990 to 2005 as a radio engineer in satellite intelligence — sent them his CV.  Prosecutors claimed Kravtsov revealed secret information in his CV, an action which was deemed to amount to high treason. 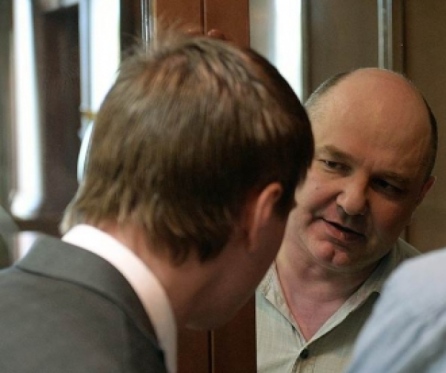 The life of a Russian Human Rights lawyer is not always easy… On August 5 2014, Pavlov found out that his wife Jennifer Gaspar’s residency permit had been revoked.

“On Aug. 5, we received a letter from the FMS (Federal Migration Service) notifying us that her residency permit had been revoked — she is a U.S. citizen — and saying she had to leave Russia within 15 days of the decision,” Pavlov said.

“We looked below to see when the decision had been taken, and realized that we had received the letter (as it came to us by mail) on exactly the 15th day.”

After Gaspar appealed the decision, a court hearing revealed that the FMS had acted on the instructions of the Federal Security Service, or FSB, a successor agency to the Soviet KGB, which declared Gaspar — who worked as an adviser to NGOs — a “threat to national security.” No grounds were given for the allegation. [Moscow Times]

Before joining the Kaspersky Lab’s Computer Incident Investigations Department, Ruslan Stoyanov has worked as a major in the Russian Ministry of Interior’s Moscow Cyber Crime Unit. But, in between these jobs, he worked for a cybercrime investigation firm called ‘Indrik’.  His only colleague at ‘Indrik’ was Dmitry Levashov whose girlfriend — Kimberly Zenz — worked for iDefense, later Verisign.

Regarded as an experienced hacker, Dokuchaev also worked at the (2nd department of operative management) FSB Information Security Center (ISC). Dmitry Dokuchaev was thus a colleague of Mikhailov’s at the FSB.

Dokuchaev is native of Yekaterinburg, where he graduated from one of the technical colleges in 2005. In the IT-community, he gained fame after breaking through  several major sites, including in the US. These events attracted the attention of the FSB ISC.

In March 2017, the US has announced charges against Dokuchaev — as well as another  Russian intelligence officer and two hackers — over a massive Yahoo data breach that affected at least 1 billion user accounts.

Kommersant has provided some details about Georgy Fomchenkov, whose name had been earlier revealed by Novaya Gazeta. He was involved in the work of payment services used by webmasters of pornographic sites. And there is ‘traces of his activities’ in the archives of crutop.nu forum, administrated by the founder of Chronopay payment system Pavel Vrublevsky.

And of course, like Sergey Mikhailov, Dmitry Dokuchaev and Ruslan Stoyanov, Georgy Fomchenkov was involved in the investigation of Pavel Vrublevsky…