“But it’s worse than that. This training is also bad security policy, since the most dangerous and effective counterintelligence or terrorist threats are unlikely to telegraph their views openly. Those who are on the lookout for outspoken critics of U.S. foreign policy based on this training are likely to miss them entirely.”

Secrecy expert at the Federation of American Scientists

A new version of a computer-based cyber-security training course from the Pentagon is available online. Despite evidence to the contrary, the Pentagon still classifies disillusionment with U.S. foreign policy as a “threat indicator” that a federal employee might be a spy. Follow us on Twitter: @Intel_Today

In a recent post, I encouraged you to take the CYBER AWARENESS CHALLENGE test.

Version 4.0 of a computer-based cyber-security training course from the Pentagon is available online.

The test is a good ‘no-nonsense’ introduction to “Cyber Awareness” and you probably had no problem to obtain the “Certificate”. 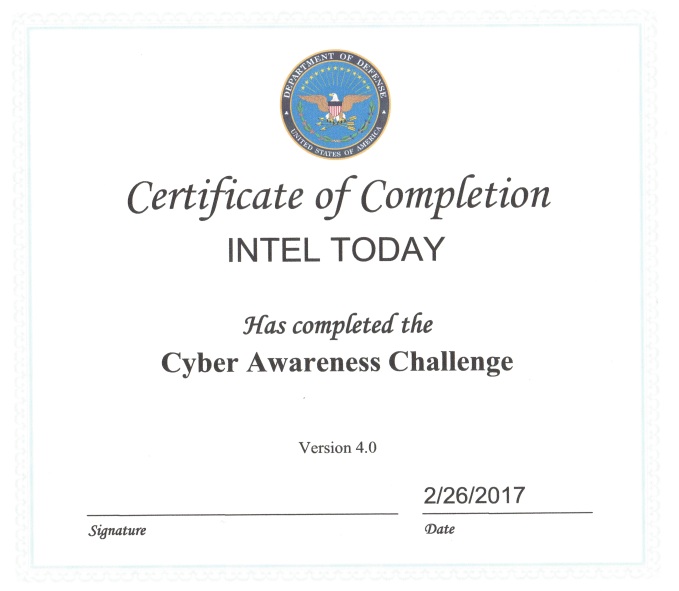 However, you should know that some aspects of this training/test have been criticized.  We will now discuss the controversy surrounding a very specific topic: the identification of an ‘Insider Threat’.

If you have taken the test, you will have noticed that the Pentagon still classifies disillusionment with U.S. foreign policy as a “threat indicator” that a federal employee might be a spy.

Government employees are still dinged with a loss of points in a spy-catching game if they don’t identify dissent and foreign travel as her threat “indicators.”

Helen “speaks openly of unhappiness with U.S. foreign policy.” Combined with her trips abroad and her money troubles, these clues get her labeled as a “high” threat.

But not everyone agree. Some critics allege that the US government is  trampling on the First Amendment. And many experts believe that this training could be counter-productive.

One concerned federal employee, who took the training in an agency far removed from the Pentagon, told HuffPost that its goal seems to be “to encourage workers to identify individuals with critical opinions about our government and overtly consider them suspect.”

“There is a message of intimidation here. If you express a concern about the government’s functioning, you are a suspect,” said the federal worker, who requested anonymity for fear of reprisal from his agency. [HuffPost]

DIA investigator Scott W. Carmichael is credited for unmasking the role of Ana Montes as a Cuban spy. Carmichael made it clear that Montes’ political views were only of limited use in his investigation.

“Many people in government and academia also believed that the government’s policy toward Cuba was mistaken. Some members of Congress thought so, too,” he wrote.

“Once Montes got to the DIA, she avoided “idle chatter and personal interactions.”