“The shoot-down of Iran Air flight 655 was an accident, but that is not how it was seen in Tehran. The Iranian government assumed that the attack had been purposeful. … Tehran convinced itself that Washington was trying to signal that the United States had decided to openly enter the war on Iraq’s side.” 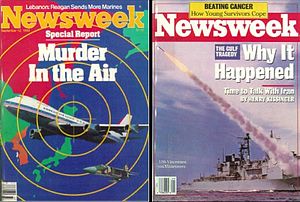 Pictured here, Newsweek covers for 12 September 1983 (left) and 18 July 1988 (right) that illustrate KAL and Iran Air incidents respectively. A full-page photo of the airplane with “Murder in the Air” leaves little doubt in reader’s mind of who the culprits were, while “Why it Happened” with no graphic presentation of the airplane is accompanied by questioning and soul-searching

Former CIA Director John McLaughlin seems to suffer from ‘bad memory’. Let us help him to recollect some facts. Follow us on Twitter: @Intel_Today

“If you walked into any high school classroom in the United States and asked the students to describe their country’s relationship with Iran, you’d probably hear words like “enemy” and “threat,” maybe “distrust” and “nuclear.” But ask them what the number 655 has to do with it, and you’d be met with silence.

Try the same thing in an Iranian classroom, asking about the United States, and you’d probably hear some of the same words. Mention the number 655, though, it’s a safe bet that at least a few of the students would immediately know what you were talking about.

The number, 655, is a flight number: Iran Air 655. If you’ve never heard of it, you’re far from alone. But you should know the story if you want to better understand why the United States and Iran so badly distrust one another.”

Iran Air Flight 655 was an Iran Air passenger flight from Tehran to Dubai. On 3 July 1988, the aircraft operating on this route was shot down by a missile cruiser fired from the USS Vincennes under the command of William C. Rogers III. The incident took place in Iranian airspace, over Iran’s territorial waters in the Persian Gulf, and on the flight’s usual flight path.  All 290 people on board died.

Well, it would appear that former CIA Director John McLaughlin does not know any better than a US teenager. Or else? Please listen carefully to his words (at 5:44).

“We don’t blow up civilian airliners up in the air…”

The ‘ethnocentric media bias’ (That is the slang academics use for ‘propaganda’ in the US.) has been studied and is well documented. It has been shown to provide a powerful tool to build public opinion against ‘perceived enemies”. For instance,

He stated that by “de-emphasizing the agency and the victims and by the choice of graphics and adjectives, the news stories about the U.S. downing of an Iranian plane called it a technical problem while the Soviet downing of a Korean jet was portrayed as a moral outrage”.

In July 2014, when Malaysia Airlines Flight 17 was shot down in Ukraine. Again, the discrepancy of U.S. official position and media coverage of the Iran Flight 655 incident was clearly evident.

It is true that we do not know who — if anyone — shot down Dag Hammarskjöld’s Ndola United Nations DC-6 (Partly because the NSA is hiding crucial information). It is also true that we cannot be sure that the US military shot down Itavia Flight 870 (even tough, the US military is a prime suspect in this tragedy). In the case of Cuban Flight 455, I would even agree — as Gary Webb once put it — that there is a difference between people “working at the CIA” and people “linked to the CIA”. But surely, in the case of Iran Flight 655, even a former CIA Director should be able to tell the truth. As Dr Jim Swire — the father of a young girl who die in the Pan Am 103 disaster — once told me, “I wish to forgive… ” But the truth is of course a pre-condition to forgiveness.