“I will continue to pursue foreign intelligence with vigor no matter where the facts lead.” 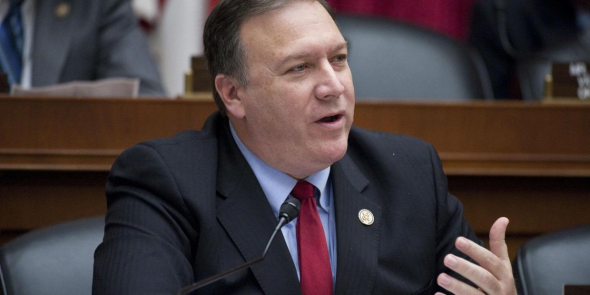 Though Mr. Pompeo is known for his unrelenting partisanship in Congress, both Democrats and Republicans have said they believe he is capable of rising above the political fray to lead the C.I.A. Follow us on Twitter: Intel_Today

Pompeo mostly told the Senators what they wanted to hear, sought to avoid politics as much as possible, even when pressed on issues on which he has previously expressed strong positions such as the Iran Nuclear Deal.

Pompeo appeared to part ways with Mr Trump on torture, Russia and the DNC hacking. He was evasive on the questions regarding surveillance programs and denied that there is a ‘morale’ problem at the CIA due to Trump’s negatory view of the Agency.

After a rocky start — the room went dark due to a power outage — and an introduction by former Senator Bob Dole and current Senator Pat Roberts, Pompeo began with some opening remarks.

“Moscow has reasserted itself aggressively, invading and occupying Ukraine, threatening Europe and doing nothing to aid in the defeat of ISIS.”

Some Senate Democrats — including Diane Feinstein — indicated that Mr. Pompeo could face a difficult confirmation hearing, citing some of his past comments, particularly his praise for the C.I.A.’s former detention and interrogation program.

When asked by Senator Dianne Feinstein if he would “restart the CIA’s use of enhanced interrogation techniques that fall outside of the Army field manual,” Pompeo replied, “absolutely not.”

Pompeo is an outspoken supporter of the National Security Agency’s surveillance programs, especially the mass collection of metadata.

Sen. Ron Wyden, D-Ore., demanded to know where Pompeo stood on the controversial issue of domestic surveillance, pointing to a recent op-ed in the Wall Street Journal where the nominee proposed amassing “all metadata” publicly available, including financial information and “lifestyle” details, in order to sniff out possible terrorists and criminals. “Are there any boundaries?” Wyden asked.

While Pompeo reassured Wyden there are in fact “legal boundaries” to prohibit him from creating such a massive dossier of information, particularly on Americans, he argued the intelligence community would be “grossly negligent” if it didn’t take advantage of “publicly available information … to make Americans safe.”

During his hearing, Mr sessions said he “has no reason to doubt” US intelligence findings that linked Vladimir Putin to the hacking of Democratic party emails. Mr Pompeo answered in a similar way.

“It’s pretty clear about what took place here about Russia involvement in efforts to hack information and to have an impact on American democracy.”

Pompeo is well-known for his strong opposition to the Iran Nuclear Deal.

Pompeo said Thursday that though he opposed the Iran nuclear agreement as a member a Congress, “If confirmed [as CIA director], my role will change.”

He vowed to continue to evaluate Iranian compliance with the agreement, which put limits on Iran’s nuclear programs in exchange for lighter sanctions. Yet he cautioned: “The Iranians are professionals… At cheating.”