“Dark Alliance, the San Jose Mercury News’s bombshell investigation into links between the cocaine trade, Nicaragua’s Contra rebels, and African American neighborhoods in California, remains one of the most explosive and controversial exposés in American journalism.”

On December 10, 2004 investigative journalist Gary Webb died of two .38 caliber gunshot wounds to the head. The coroner ruled the death a suicide. Follow us on Twitter: @INTEL_TODAY

“Webb resisted the first shot [to the head that exited via jaw] so he was shot again with the second shot going into the brain.”

FBI Gunderson regards the theory that Webb could have managed to shoot himself twice as “impossible!”

And then I wrote some stories that made me realize how sadly misplaced my bliss had been.

The reason I’d enjoyed such smooth sailing for so long hadn’t been, as I’d assumed, because I was careful and diligent and good at my job.

The truth was that, in all those years, I hadn’t written anything important enough to suppress.”

The CIA & The Media

In September 2014, the CIA released a trove of documents spanning three decades of secret government operations.

Culled from the agency’s in-house journal, Studies in Intelligence, the materials include a previously unreleased six-page article titled “Managing a Nightmare: CIA Public Affairs and the Drug Conspiracy Story.”

Looking back on the weeks immediately following the publication of “Dark Alliance,” the document offers a unique window into the CIA’s internal reaction to what it called “a genuine public relations crisis” while revealing just how little the agency ultimately had to do to swiftly extinguish the public outcry. [The Intercept]

The “Dark Alliance” series remains controversial. Critics view the series’ claims as inaccurate or overstated, while supporters point to the results of a later CIA investigation as vindicating the series.

Criticism has also been directed at the follow up reporting in the Los Angeles Times and other papers for focusing on problems in the series rather than re-examining the earlier CIA-Contra claims. [WIKIPEDIA]

Kill the Messenger is a 2014 American crime thriller film directed by Michael Cuesta and written by Peter Landesman.

It is based on the book of the same name by Nick Schou and the book Dark Alliance by Gary Webb which focuses on CIA involvement in Contra cocaine trafficking.

The film stars Jeremy Renner in his first film as a producer. The film was released on October 10, 2014. [WIKIPEDIA] 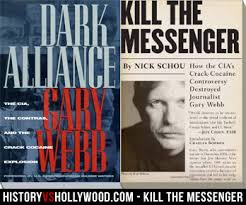