“So it’s interesting to look at these in hindsight. We used to look at them as kind of discrete events, not tied to each other, and seen in a vacuum. But from a distance, I think we can see more of a pattern.” 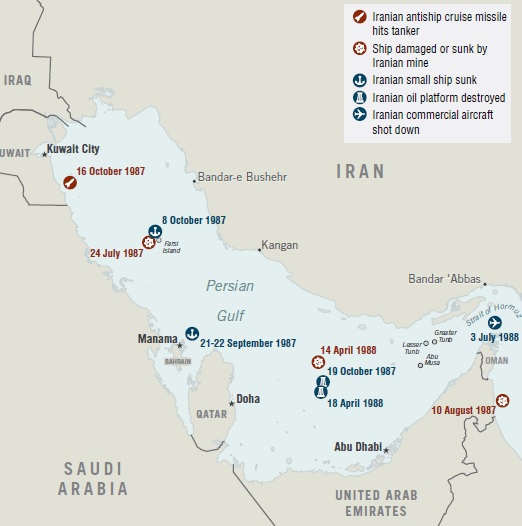 Major Incident During Operation Earnest Will

The CIA has just published an interesting analysis by Richard A. Mobley regarding the role of the US Intelligence Community during Operation “Earnest Will”. Follow us on Twitter: @INTEL_TODAY

Dozens of recently declassified documents show the crucial role the Intelligence Community (IC) played in supporting US efforts to protect reflagged Kuwaiti tankers against Iranian attack during the height of the so-called “Tanker War” during 1987 and 1988.

Earnest Will, the US Navy’s operation to escort Kuwaiti tankers granted US flag status, was controversial because of what critics saw as abandonment of US neutrality during the Iran-Iraq War (1980–1988), an open-ended commitment, and increasing the risk of escalating conflict with Tehran.

Differing assessments of the risks, Iranian decisionmaking, and command and control (C2) fueled persistent controversy within the IC, frustrated some consumers, and became a matter of politicized, acrimonious congressional hearings even before the operation started. Nevertheless, CIA did a creditable job in providing structured, reasoned assessments of potential Iranian responses. The IC provided tactical warning of some Iranian attacks, and IC scientific and technical intelligence analysis assessed the danger posed by Iranian weapons, established Tehran’s culpability in their use despite Iranian denials, and offered persuasive evidence when Iran took the United States to court before the International Court of Justice (ICJ) for attacking its oil platforms in the so-called “Platforms Case.”

Director of NSC Intelligence from 1984 to 1987, Vincent Cannistraro went on to serve as chief of operations for the CIA’s Counterterrorism Center and to lead the CIA’s investigation into the bombing of Pan Am 103.

Let us listen to an old interview of Vincent Cannistraro. In this interview, conducted in late September 2001, Cannistraro discusses the Reagan administration’s response to terrorism in the 1980s and the factors that shaped its policy; the role of U.S. intelligence in combating terrorism.

The Iran-Contra scandal was a major disaster, both for the administration, but also policy-wise for the United States. Its credibility in that part of the world is damaged very, very seriously.

You might say that the major policy debate after that is, what we do to repair the damage, and how do we regain credibility with countries in the Gulf that are important to us? One of the results was Kuwait and the flagging with American flags of Kuwaiti vessels that were being challenged by the Iranian Revolutionary Guard in the Gulf. We protected those with American flags and with U.S. naval power to escort Kuwaiti ships in order to protect them against challenge from the Iranian navy. And that’s kind of the fallout, that we get involved in the Gulf on the side of Kuwait against Iran.

And of course, one of the great tragedies that emerges in the summer of 1988 is one of our naval vessels shoots down an Iranian Airbus, by mistake, but nevertheless with a great loss of civilian life on this civilian airliner. That, in itself, generates a sequence of events that comes back to haunt us. So it’s interesting to look at these in hindsight. We used to look at them as kind of discrete events, not tied to each other, and seen in a vacuum. But from a distance, I think we can see more of a pattern.

And a few months later, Pan Am 103 exploded above Lockerbie. Many — well informed — people believe that this event was indeed a “revenge operation” for the Iranian Airbus.  See:  From Iran Airbus 655 to Pan Am 103

A Word of Caution

According to the official version of history, the downing of the Iranian jetliner was a tragic mistake while the obliteration of Pan Am 103 was an act of terrorism blamed on two Libyan agents.

Over the last two decades, there have been persistent allegations that Tehran had ordered the bombing of Pan Am 103 in revenge for the shot down of their Airliner by the USS Vincennes.

Like many of my friends, I have also believed that Teheran had played a hand in the destruction of Pan Am 103. However, I have learned recently that the key ‘evidence’ — an alleged payment of US$ 10 million – from Tehran to Ahmed Jibril (on 23/12/1988) is not factual. Yes, the payment is often mentioned in declassified US Intelligence documents but a detailed investigation of this ‘payment’ indicates that it has nothing to do whatsoever with Lockerbie. SEE: The Legend of The Iranian Payment – UPDATE