“Espionage is everywhere: twisted tales of deception, secrecy and surveillance are never far from the headlines. So it’s no wonder that these real world spy stories find their way to the big screen.” 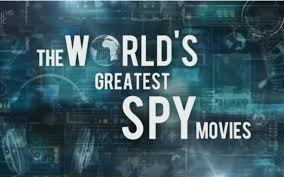 The World’s Greatest Spy Movies will reveal the top secrets of espionage through a countdown of the ten most thrilling spy movies of all time. Follow us on Twitter: @INTEL_TODAY

As chosen by real spies and spy-masters, the programme will untangle fact from fiction – from le Carre style gritty realism to the outlandish espionage fantasies of Jason Bourne, to our very British superhero James Bond.

How do our favourite screen spies measure up against their real world counter-parts? ”

“We’ll find out, as we watch the top ten spy movies through the eyes of former spies and spymasters, from MI6, the CIA and the KGB.

This one off special will examine to what extent our top ten have drawn accurately on real life events, such as the search for Osama bin Laden in Zero Dark Thirty, brain-washing in the Ipcress File or the hunt for the Cambridge spies in Tinker Tailor Soldier Spy. From double agents, to informants, to disguise, we will find out which film comes closest to the truth, and who has won the number one spot.

Espionage is everywhere: twisted tales of deception, secrecy and surveillance are never far from the headlines. So it’s no wonder that these real world spy stories find their way to the big screen.

Each film analysis will combine clips of some of the most memorable scenes in cinematic spy history with expert testimony, to tell us something new about the world of espionage.

We will hear from the real participants in some of the most theatrical spy plots that have found their way to cinema – the men and women who can tell us what it’s really like to live inside a false identity, groom an informant, interrogate a suspect…….Some of them will be breaking their story for the first time on screen.

The appeal of spies may be timeless but we expose how the intelligence services have changed. In the age of technology can computers replace humans in delivering better intelligence. Is there still space for real life spies after the digital revolution?

What makes the perfect spy? Maverick Bond – and which Bond at that? Or the tormented Bourne may be what we’d like to think of as a typical secret agent. But today’s real life spy may be rather surprising in a world where technical dexterity or emotional intelligence tops the list of must have qualities for budding spies.

There are take-away facts too and some proper spycraft on display – as our experts let slip some of their favourite tools of the trade. Mixing Hollywood entertainment with astonishing revelations The World’s Greatest Spy Movies will entertain, surprise and tell you all you need to know about the world of espionage from those who have lived it.”