“The siren howled. But I just sat there for a few seconds, staring at the big, back-lit, red screen with the word ‘LAUNCH’ on it.” 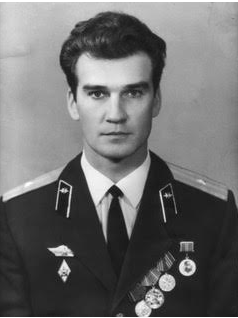 September 26 2020 — On September 26 1983 — just three weeks after the Soviet military had shot down Korean Air Lines Flight 007 — Stanislav Petrov was the duty officer at the command center for the Oko nuclear early-warning system when the system reported that a missile had been launched from the United States, followed by up to five more.

Petrov judged the reports to be a false alarm and his decision is credited with having prevented an erroneous retaliatory nuclear attack on the United States and its NATO allies that could have resulted in large-scale nuclear war. Investigation later confirmed that the Soviet satellite warning system had indeed malfunctioned. Follow us on Twitter: @INTEL_TODAY

RELATED POST: One Year Ago — Top US Nuclear Commander: “I wouldn’t carry out illegal nuclear strike order from Trump”

RELATED POST: One Year Ago — Former Double Agent : “Self-destruction of humankind has been put back on the agenda”

Stanislav Petrov , a lieutenant colonel in the Soviet Air Defence Forces, was in charge at a secret bunker near Moscow when an alarm sounded, indicating that the US had launched a nuclear missile.

“The incident took place at a particularly tense time during the Cold War, as the USSR had shot down a South Korean passenger jet in Soviet airspace just three weeks before.

If the US launched a nuclear attack, the Russians almost certainly would have retaliated with a devastating counterattack.

He had a hunch the warning was a false alarm, and he held to that view even when the computer system reported the launch of four more Minuteman intercontinental ballistic missiles.

Petrov later said the main reason for his conclusion was that the US would have launched a nuclear attack with a barrage of missiles, not five, to cripple the USSR.

He also doubted the satellite-based early-warning technology; the more reliable ground-based radar, which would have picked up the incoming missiles minutes later, showed nothing out of the ordinary.”  [Physics Today]

On this day in 1983, Colonel Petrov simply saved the world.

He was not even supposed to be on duty. He was replacing a sick colleague. Most of his colleagues — probably all of them — would have most likely followed the procedures.

“The Man Who Saved The World”