“The case was largely based on this inside guy [Libyan defector Abdul Majid Giaka]. It wasn’t until the trial that I learned this guy was a nut-job and that the CIA had absolutely no confidence in him and that they knew he was a liar. The CIA and the FBI kept the State Department in the dark. It worked for them for us to be fully committed to the theory that Libya was responsible.”

“I regard the Lockerbie verdict against Megrahi as a ‘Grand Monument to Human Stupidity’.  Indeed, the written opinion of the Lockerbie judges is a remarkable document that claims an ‘honoured place in the history of British miscarriages of justice.’ If the [SCCRC] Commission accepts the application for a full review, the infamous Zeist verdict doesn’t have a snowball’s chance in hell of surviving.” 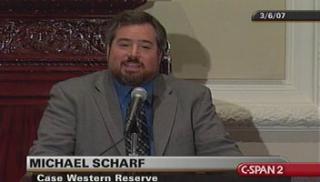 On January 31, 2001, the Scottish Court in the Netherlands rendered its verdict in the Pan Am 103 bombing trial. The court found one of the two Libyan defendants, Al Amin Fhima, not guilty and he was immediately returned to Libya where he received a hero’s welcome.

It found the other defendant, Abdelbaset al-Megrahi, guilty of murder and sentenced him to a minimum of 20 years imprisonment in Berlinie prison in Scotland. The verdict did not, however, implicate those higher up in the Libyan government, nor did it rule out the possible involvement of Iran in the bombing.

Moreover, although the decision to convict Al-Megrahi was unanimous, the judgment indicates that it had been a close call, with the three judges acknowledging that the prosecution’s case had “uncertainties and qualifications” and that key witnesses had repeatedly lied.

Indeed, portions of the judgment read as though the text had been drafted for a “not proven” verdict, which is used under Scottish law when the court is convinced of guilt but the evidence does not rise to the level of “beyond reasonable doubt.”

RELATED POST: PT/35(b) — An Overview of the Lockerbie Case

RELATED POST: PT/35(b) — The Most Expensive Forgery in History [Lockerbie]

RELATED POST: Lockerbie — MEBO TELECOM and the Story of the MST-13 Timers

RELATED POST: Should You Trust The New York Times and Its Official Sources?

Analysis of the Judgment by Michael P. Scharf

Although the eight-month-long trial featured the testimony of 235 witnesses and the admission of thousands of pieces of physical and documentary evidence, the case ultimately turned on just four key pieces of physical evidence recovered from the wreckage of Pan Am 103 in Scotland, one vital document supplied by Germany, and four crucial witnesses from the United States, Switzerland, Malta and Sweden.

The first important piece of physical evidence was the reconstruction of the aircraft itself, which the court found indicated that there had been a bomb detonation in cargo container AVE 4041. The suitcases loaded onto that particular container, the court concluded, came from the Pan Am feeder flight (Pan Am 103A) from Frankfurt. The second was the recovery from the wreckage of charred pieces from a Toshiba RT-SF 16 Bombeat radio cassette player and a brown Samsonite suitcase, which the court found had contained the bomb. The third was the discovery of charred remnants of clothing (two pairs of Yorkie trousers, a blue Babygro jumper, and an umbrella) which had been packed in the bomb suitcase. The court found that the clothing originated in Malta and had been sold by a small store called “Mary’s House.” The fourth was a tiny fragment of a circuit board for an MST-13 timer, which the court found had been manufactured by a Swiss electronics firm called MEBO.

The document that played such an important part in the case was a computer printout of baggage tracking information for Frankfurt airport at the time the Pan Am feeder flight was being loaded. The document proved to the court’s satisfaction that an unaccompanied bag had been transferred from Flight KM180 from Malta to Pan Am 103A. But the Court found that the prosecution had not proved how this suspicious suitcase had been placed on board KM180. This, the court pointed out, is “a major difficulty for the Crown case.”

The first key witness was Abdul Majid (aka Giaka), a member of the Libyan External Security Organization (JSO) who worked as a double agent for the CIA and is now in the U.S. witness protection program. In light of inconsistencies in his testimony and CIA documents released late in the trial suggesting he was prone to fabrication, the court found that Abdul Majid could not be accepted as a “credible and reliable witness.” After summarizing Majid’s various lies and exaggerations, the court concluded: “Information provided by a paid informer is always open to the criticism that it may be invented in order to justify payment, and in our view this is a case where such criticism is more than usually justified.” The court therefore rejected Majid’s claims that the defendant Fhima possessed plastic explosives in his office desk at Luqa airport and that he saw the two defendants load a brown Samsonite suitcase into KM180 on the morning of the Lockerbie bombing. The court did, however, accept Majid’s testimony that al-Megrahi was a high-ranking member of the JSO, that al-Megrahi traveled on a fake passport, and that his job was military procurement — findings that were to prove critical to the verdict.

The second important witness was Edwin Bollier, the owner of the MEBO electronics firm in Zurich. Bollier, the court found, was an “untruthful and unreliable witness” and much of his testimony “belongs in the realm of fiction where it may be best placed in the genre of the spy thriller.” However, the court accepted Bollier’s testimony that he had rented office space “some time in 1988 to the firm ABH in which the first accused [al-Megrahi] and one Badri Hassan were the principals.” The court also accepted that Bollier had supplied MEBO MST-13 timers to both Libya and the East German Stasi, but found that there was no positive evidence that the Stasi ever supplied the timers to the PFLP-GC terrorist group as the Defense suggested.

The most important witness of all was Tony Gauci, the proprietor of Mary’s House in Malta. Gauci identified al-Megrahi in court as the person who purchased the clothing that had been found in the Lockerbie bomb suitcase, although in the words of the court it was “not an unequivocal identification.” The Court noted that Gauci had previously identified individuals other than the defendant out of photo displays. In particular, Gauci had previously said that a photo of Abu Talb, a member of a Palestinian terrorist group, “resembled him a lot.” Gauci also testified that it had been raining the evening of the sale and that his brother had been at home watching a soccer game on TV. The day defendant al-Megrahi was in Malta and allegedly purchased the clothes from Mary’s House, December 7, 1988, had according to meteorological records been dry and there was no soccer game on TV. Despite these inconsistencies, the Court stated that it was “nevertheless satisfied that [Gauci’s] identification so far as it went of the first accused as the purchaser was reliable and should be treated as a highly important element in this case.”

The final witness of importance was Abu Talb, a member of a Palestinian terrorist group, who had close ties to a PFLP-GC bomb-making operation in Germany that was uncovered by Germany authorities two months before the Lockerbie bombing. Talb, it was revealed, had been in Malta in late October 1988. He was subsequently arrested and convicted by a Swedish court in 1989 for a series of terrorist bombings in Copenhagen. A search of his apartment in 1989 had uncovered a barometric detonator, clothing from Malta, and a calendar with the date of the Pan Am 103 bombing, December 21, 1988, circled. Despite these revelations, the court concluded: “We accept that there is a great deal of suspicion as to the actings [sic] of Abu Talb and his circle, but there is no evidence to indicate that they had either the means or the intention to destroy a civil aircraft in December 1988.”

The murder conviction of al-Megrahi was therefore based on four findings: first, that he was proved to be a Libyan intelligence officer “of fairly high rank”; second, that he traveled on a fake passport; third, that he was in military procurement and had dealings with MEBO; and fourth, that Gauci had identified him as the purchaser of the clothing found in the bomb suitcase. Al-Megrahi’s lawyers have filed a notice of appeal, which will likely argue that the court’s equivocal findings do not amount to proof of al-Megrahi’s guilt beyond reasonable doubt. The appeal will be heard by a five-judge panel of Scottish justices at Camp Zeist in the Netherlands later this year.

From the point of view of the families of the victims, the most important finding in the judgment had to do with Libya’s responsibility for the bombing. The court stated: “The clear inference which we draw from this evidence is that the conception, planning, and execution of the plot which led to the planting of the explosive device was of Libyan origin.” The court did not, however, indicate how high up the Libyan government chain of command the responsibility extends, nor did it rule out the possibility that Iran had also been involved in the bombing plot, as many experts still suspect.

The Aftermath — In any event, the court’s finding will make it immeasurably easier for the civil plaintiffs to prevail in the litigation against Libya now pending in the Southern District of New York. Now that the government’s evidence implicating Libya has been used in a public trial, the plaintiffs can access it and use it in their civil litigation. Although the Scottish Court’s findings will not apply to the civil case as res judicata or collateral estoppel, the New York judge can take judicial notice of the Scottish Court’s conclusions in denying a pre-trial motion for dismissal. And the Scottish Court’s conclusions will make it much more likely that Libya will settle the case because of the risk of a judgment with tremendous punitive damages rivaling recent tobacco litigation. Libya’s ambassador to the United Kingdom, Mohammed al-Zwi, said the day after the verdict that Tripoli would consider compensating the victims once the appeal process was over. Many experts expect Libya to make an ex gratia payment to the families as part of a settlement of the multi-billion dollar law suit and to satisfy President George W. Bush’s condition for lifting U.S. sanctions that Libya “accept responsibility for this act and compensate the families.”

While U.S. sanctions are still in place, the United Nations’ sanctions were “suspended” in April 1999 when Libya handed over the two defendants to the Netherlands and cannot be reimposed without an affirmative vote of the Security Council. France, the United Kingdom, and Russia have indicated that they would not support a move to reimpose sanctions on Libya.

Despite the mixed verdict and limited findings, the Lockerbie trial has apparently succeeded in severing the cycle of violence between the United States and Libya. Libya has made a show of terminating its support for terrorist groups, and its actions are now more closely scrutinized by the international community. The trial may not have achieved the full truth to the satisfaction of the families of the victims but it has contributed to international peace and security.

Michael P. Scharf is Professor of Law and Director of the Center for International Law and Policy at New England School of Law. He served as counsel to the U.S. State Department’s Counter-Terrorism Bureau during the Pan Am 103 investigation and Attorney-Adviser for U.N. Affairs when international sanctions were imposed on Libya.

This entry was posted in Lockerbie and tagged Lockerbie, Michael P. Scharf, Pan Am 103 (Lockerbie). Bookmark the permalink.