“Ireland that has wronged no man, that has injured no land, that has sought no dominion over others. Ireland is treated today among other nations of the world as if she was a convicted criminal. If it be treason to fight against such an unnatural fate as this, then I am proud to be a rebel and shall cling to my rebellion with the last drop of my blood.”

“If there be no right of rebellion against a state of things that no savage tribe would endure without resistance, then I am sure that it is better for men to fight and die without right than to live in such a state of right as this.”

“After his death Casement became one of the best-remembered of the 1916 sixteen, perhaps because two controversies kept his memory alive: the campaign for his body to be returned to Ireland and the ‘Black Diaries. His connections with Ulster also raised his profile during the anti-partition campaign of the late 1940s/early ‘50s. In 1953 the GAA named its stadium in Belfast, Casement Park. Casement’s body was returned to Ireland in 1965 – a goodwill gesture by Labour Prime Minister Harold Wilson – on condition that he was buried in Dublin, and not at Murlough Bay in Antrim as he had wished. President Eamon de Valera, who had named a son (Ruairí) after him, marched proudly to Glasnevin Cemetery despite the freezing weather. But it was only in recent years that Casement’s career as a humanitarian has been fully acknowledged in Ireland and the two strands of his remarkable career have been integrated. ”

Mary E. Daly — Emeritus Professor of History at UCD and President of the Royal Irish Academy 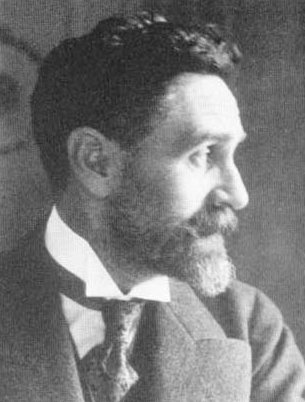 Roger Casement attempted to smuggle weapons from Germany for the Easter Rising, an armed insurrection in Ireland during Easter Week of April 1916.

August 3 2019 — Sir Roger David Casement (1 September 1864 – 3 August 1916) was an Irish nationalist who worked for the British Foreign Office as a diplomat and later became a humanitarian activist, poet and Easter Rising leader. Described as the “father of twentieth-century human rights investigations”, he was honoured in 1905 for the Casement Report on the Congo and knighted in 1911 for his important investigations of human rights abuses in Peru.

In April 1916, Roger Casement attempted to smuggle weapons from Germany for the Easter Rising, an armed insurrection in Ireland during Easter Week. He was arrested, convicted and executed for high treason. But sometimes, even a death sentence can be ridiculously hilarious. Roger Casement himself wrote that he was to be “hanged on a comma”, leading to the well-used epigram. Follow us on twitter: @Intel_Today

At Casement’s highly publicised trial for high treason, the prosecution had trouble arguing its case. Casement’s crimes had been carried out in Germany and the Treason Act 1351 seemed to apply only to activities carried out on English (or arguably British) soil.

A ‘creative’ reading of the Act allowed for a broader interpretation: the court decided that a comma should be added to the original Norman-French text, crucially altering the sense of the text so that “in the realm or elsewhere” referred to where acts were done and not just to where the “King’s enemies” might be.

Hanged on a Comma

The actions for which Sir Roger was convicted included trying to persuade Irish prisoners of war who were held in Germany to form an Irish Brigade to fight against the British.

During the trial, Sir Roger’s counsel argued that acts performed outside the UK could not amount to treason within the UK. 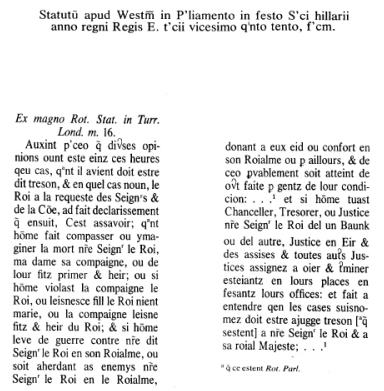 …if a Man do levy War against our Lord the King in his Realm, or be adherent to the King’s Enemies in his Realm, giving to them Aid and Comfort in the Realm, or elsewhere …

However, in the version under discussion in R v Casement, the final comma in the above text (after the third “Realm”) was not included.  IP Draughts surmises that the comma was added to the official version after the Casement trial.

and that the words “giving to them Aid and Comfort in the Realm or elsewhere” were by way of explanation of how assistance (adherence) might be given to the King’s enemies.

In other words, the assistance had to be given in the King’s realm, but the effect of that assistance could be to aid and comfort the King’s enemies wherever those enemies were located.

(In case any reader feels brave enough to tackle the Norman French original, the equivalent phrase to the “giving to them Aid and Comfort” begins at the top of the second column above, with the words “donant a eux…”.  In the words of the Lord Chief Justice, “The Norman French does not help you; it just brings you back to the same point.”)

The alternative meaning of these quoted words is that the phrase “or elsewhere” applies to all 3 instances of “in his Realm” in the English version quoted above.  This is the meaning that was accepted by the court (and it seems, by most of the cases and legal writers in the intervening centuries, including Lord Coke), which effectively read into the wording a set of brackets (parentheses) around the phrase “giving to them Aid and Comfort in the Realm”.  An alternative (but less satisfactory) way of improving the sense of the wording is to add a comma after the third “Realm” in the way that has been done in the official version quoted above.

After the court rejected Sullivan KC’s submission, Sir Roger was permitted to make a statement to the court, and then counsel for both sides made their closing speeches.  Finally, the Lord Chief Justice summed up, and the jury retired.

The jury unanimously found Sir Roger Casement guilty of high treason.  Before passing sentence, the Lord Chief Justice invited Sir Roger to say why the court should not pass sentence on him.

Sir Roger responded that there was an objection, “possibly not good in law, but surely good on moral grounds, against the application to me here of this old English statute, 565 years old, that seek to deprive an Irishman today of life and honour, not for ‘adhering to the King’s enemies’ but for adhering to his own people.”

On the conclusion of Sir Roger’s response, the Lord Chief Justice sentenced Sir Roger to death by hanging.

Sir Roger appealed.  The appeal was heard in July 1916 before a panel of 5 High Court judges.  Sullivan KC again argued that treason outside the King’s realm was not treason under the terms of the statute.  Two of the appeal judges seem to have blindsided him by pointing out that they had visited the Record Office and compared the Statute Roll and Parliamentary Roll and noticed some discrepancies in the wording of the Norman French in the equivalent of the “giving aid and comfort” wording.  At one point during the appeal hearing, the discussion descends to whether a mark on the original roll indicates a comma, a bracket or just a centuries-old fold in the paper!

Sullivan KC shrugged off these objections and persevered with his argument on the meaning of the words used in the statute.

The appeal was rejected.  In August 1916, Sir Roger Casement was hanged at Pentonville Prison, in London.

PS:   Sir Richard Branson’s grandfather, Sir George Branson, was a junior barrister on the prosecution team that obtained the conviction of Sir Roger Casement for treason.

Only one piece of footage of Casement himself is known to exist, and Topical Budget’s newsreel cameras had to improvise as his dramatic downfall played out.

This short item from 17 May captures crowds waiting “in vain” outside Bow Street Magistrate’s Court for a glimpse of the prisoner: traitor to some, hero to many.

Arrested on 21 April 1916, hours after landing on the Kerry coast in a German submarine and just three days before the Easter Rising began in Dublin, Casement was whisked away to London to stand trial for treason.

He was finally executed on 3 August, his fate sealed by the discovery and distribution of the legendary ‘Black Diaries’, which contained accounts of his homosexual activities. His body was buried in quicklime at Pentonville Prison and his remains not repatriated to Ireland until 1965.

The Execution of Roger Casement

Angus Mitchell, University of Limerick, gives an account of Roger Casement’s execution in 1916.

The Life & Legacy of Roger Casement By Mary E. Daly

Hanged on a comma: drafting can be a matter of life and death  — IP Draughts