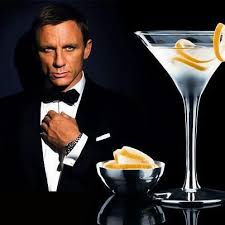 “Shaken, not stirred” is a catchphrase of Ian Fleming’s fictional British Secret Service agent James Bond and describes his preference for the preparation of his martini cocktails. Follow us on Twitter: @Intel_Today

In the film adaptations of Fleming’s novels, the phrase is first uttered by the villain, Dr. Julius No, when he offers the drink in Dr. No (1962), and it is not uttered by Bond himself (played by Sean Connery) until Goldfinger (1964). [Wikipedia]

It is used in numerous Bond films thereafter with the notable exceptions of You Only Live Twice (1967), in which the drink is wrongly offered as “stirred, not shaken”, to Bond’s response “that’s right”.

In Casino Royale (2006), Bond, after losing millions of dollars in a game of poker, is asked if he wants his martini shaken or stirred and snaps, “Do I look like I give a damn?”