“Either we need a new election or hang former CIA Director John Brennan for putting out disinformation.” 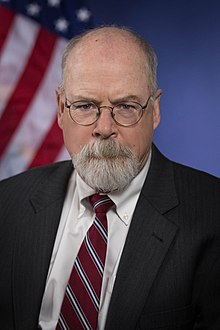 May 16 2019 — US Attorney General William Barr has assigned a senior federal prosecutor to examine the origins of the Russia investigation. Former U.S. Attorney and Special Counsel Joe diGenova believes John Brennan, the former CIA director (2013-2017), is at the core of the fraudulent Russia-Trump collusion conspiracy. Follow us on Twitter: @INTEL_TODAY

UPDATE (October 27 2019) — John Durham’s ongoing review into the origins of the Russia investigation has transitioned into a full-fledged criminal probe.

The Federalist just published an interesting piece titled: “All The Russia Collusion Clues Are Beginning To Point Back To John Brennan“.

The author argues that John Brennan’s CIA and the intelligence community did much more than merely pass on details to the FBI. They fabricated these events completely.

“The evidence suggests, however, that Brennan’s CIA and the intelligence community did much more than merely pass on details about “contacts and interactions between Russian officials and U.S. persons involved in the Trump campaign” to the FBI.

These are the questions Barr and Durham should be asking themselves to arrive at the bottom line: Were the Russia connections contrived by the CIA, and was Brennan the plotter-in-chief hoping to prevent a President Trump — or to destroy him later?”

So, what are the reactions from former Director of National Intelligence James Clapper, former FBI Director James Comey and former CIA Director John Brennan himself?

Clapper appears to take refuge behind the authority. During a CNN interview, he argues that they should not be investigated for having done…  what they were told to do by the president of the United States. Remember Nuremberg?

During an interview with C-Span, Comey stated that he will move to New Zealand if President Donald Trump wins the re-election. Note: The US and New Zealand are currently working out a treaty that would deal with the extradition of accused and convicted persons between the two countries. So Libya may be a better place to retire?

John Brennan suddenly appears to have melted down. He just stated that the widening probe concerns him. Brennan should be concerned. Five lawyers might not be enough…

John Henry Durham, the US attorney in Connecticut, will investigate whether the collection of intelligence on the Trump campaign was lawful.

Intel Today would like to know what you think. Do you believe — like Former U.S. Attorney and Special Counsel Joe diGenova — that John Brennan will go to prison?

Durham (born 1950) is the United States Attorney for the District of Connecticut.

He is best known for leading an inquiry into allegations that FBI agents and Boston police had ties with the mob and his appointment as special prosecutor regarding the 2005 CIA interrogation tapes destruction.

In November 2011, Durham was included on The New Republic’s list of Washington’s most powerful, least famous people.

The Mueller Report & the Steele Dossier

The Mueller Report is very light — some will say misleading — on the role the Steele Dossier played in the Russiagate hoax.

For instance, the Mueller Report ignores the following facts:

Christopher Steele met with the FBI’s Peter Strzok in July 2016.

During the summer of 2016, Robert Hannigan, then head of GCHQ, flew to Washington to brief John Brennan personally.

This briefing led Reid to send FBI Director Comey a letter demanding an investigation of the collusion between Donald Trump and the Russians.

The Steele Dossier was also a key foundation for the FISA warrant issued to spy on American citizen, Carter Page.

I only wish that John Durham could investigate the links between the Steele Dossier and the Skripal Affair… But this will not happen.

As noted in a May 10, 2019, letter sent by Sen. Lindsey Graham (R-S.C.) to both Secretary of State Mike Pompeo and Inspector General Michael Horowitz, “Ms. Kavalec’s contacts with Steel may have been the most significant and memorialized communications with him by a U.S. government official prior to the issuance of the Carter Page FISA warrant.”

April 10 2019– U.S. Attorney General William Barr speaks to the Senate Appropriations panel about a possible inquiry into political “spying” of the Trump campaign in 2016.

UPDATE (May 20 2019) — Attorney General William Barr believes unauthorized spying took place on President Trump’s campaign during the 2016 presidential election as the Justice Department makes moves to investigate the origins of the Russia probe.

In a conversation with Fox News’ Bill Hemmer on “America’s Newsroom,” Barr suggested that he wanted to get to the bottom of whether “government officials abused their power and put their thumb on the scale” during the Russia investigation.

He criticized unnamed officials as providing “inadequate” explanations for what took place.

“People have to find out what the government was doing during that period,” said Barr, adding that if the U.S. government is concerned about foreign influence in the U.S. election process, it should be equally worried about potential abuses of power within the federal government.

Barr said he wouldn’t “speculate” on when such alleged spying exactly started.

“I think there’s a misconception out there that we know a lot about what happened.

The fact of the matter is Bob Mueller did not look at the government’s activities.

He was looking at whether or not the Trump campaign had conspired with the Russians.

But he was not going back and looking at the counterintelligence program.

And we have a number of investigations underway that touch upon it.”

In an interview Tuesday with MSNBC’s Nicole Wallace, former CIA Director John Brennan said the Trump team’s insistence on investigating the FISA warrants used to surveil members of the president’s 2016 campaign is a fishing expedition to “uncover something they will misrepresent as being part of this deep state effort to try to undermine Donald Trump’s election” in 2020.

NICOLE WALLACE: Who uses the word “spying” to discuss authorized lawful surveillance on a counter-intelligence probe, other than Sean Hannity?

JOHN BRENNAN: Well, I think they are trying to imply and to really indicate there was a misuse of authorities. That was not the case. Does CIA spy? Yes. Against our foreign adversaries? Yes. Do we spy against domestic individuals? No, we do not. We work very closely with the FBI. And when the Russians were trying to interfere in that election, and change the outcome of it in their favor, we, CIA and FBI, worked very collaboratively so we could have the ability to see what the Russians were doing and who they were working with. When William Barr said spying, it clearly indicated there was something inappropriate if not illegal. Nobody used the term spying when they are referring to a legitimate predicated authorized investigative action on the part of the FBI.

Alzheimer’s disease and emotional problems — such as stress, anxiety, or depression — can cause memory problems.

Let us be kind to Brennan and help this old man to remember that the CIA, during his tenure, spied on the US Senate.

In July 2014, after months of furious and public denials, John Brennan was forced to issue an extraordinary apology to leaders of the US Senate intelligence committee, conceding that CIA employees had spied on committee staff.

Currently, 70% of Intel Today readers believe that John Brennan will go to prison.

Do you notice what is absent from the “evidence” of Russian meddling? The Steele Dossier. This was a document commissioned by the Perkins Coie Law Firm, which hired Fusion GPS who in turn hired longtime FBI Confidential Human Source, Christopher Steele.  Steele’s name does not appear until p. 23 of the Mueller Report and it is presented in a very misleading, dishonest fashion. The Report states:

Why did Mueller fail to report that Christopher Steele met with the FBI’s Peter Strzok in July 2016? Why did Mueller fail to report that John Brennan, CIA Director, briefed Senate Minority leader Harry Reid in August 2016 on the dossier reports from Steele? This briefing led Reid to send FBI Director Comey a letter demanding an investigation of the collusion between Donald Trump and the Russians. And why did Robert Mueller not mention the fact that the Steele Dossier was a key foundation for the FISA warrant issued to spy on American citizen, Carter Page?

The Steele Dossier was a critical information element in the propaganda campaign ginned up to paint Trump as a proxy of Putin. But Mueller’s “exhaustive” investigation ignores the substantive facts about this document produced at the behest of the Hillary Clinton Campaign.